Chartered By: David B. Richardson

by Wor. James B. Kershaw

The History of Lafayette-Dover Lodge begins in 1865 as peace returned after the Civil War. Washington Lodge, a Lodge whose own history dates back to the days of the "Father of Our Country", Rt. Wor. George Washington, for whom that Lodge was named, had been established in the then Town of Roxbury, which was later annexed into the City of Boston.

Washington Lodge, a large and very influential Lodge, had grown with the community of Roxbury. It was felt by the members that there was room for another Lodge to serve the Brethren in the vicinity. On June 8, 1865, at the Regular Meeting of Washington Lodge, thirteen Brethren presented their suggestion to form a new Lodge. Having gained the enthusiastic support of Washington Lodge, a petition was submitted to the Mast Worshipful Grand Lodge of Massachusetts to establish a new Lodge under the name of "Lafayette".

Permission was granted to those thirteen Brethren and eleven others to establish the Lodge under dispensation from the Grand Master. Lafayette Lodge operated under that dispensation the first year and, on June 12, 1866, Lafayette Lodge was officially chartered by the Grand Lodge. On July 2, 1866, the twenty-four charter members and their ladies gathered for a public ceremony of Constitution and Installation of Officers by the Grand Lodge.

It is interesting to note that in the report of the Committee on Charters and By-Laws, mention is made of Article IX of the By-Laws of Lafayette Lodge which limits the number of candidates for the degrees to fifteen per year. That By-Law was specifically written so that Lafayette Lodge would not over-burden its officers with too much degree work. That limit on candidates remained in effect until 1897.

The first Master of Lafayette Lodge was Right Worshipful Charles Jarvis Danforth who served as Master for three years. He was later elected Junior Grand Warden of the Grand Lodge and died while holding that office. A monument, a broken column, was erected in his memory, near his grave in the Forest Hills Cemetery by the Lodges of the Third Masonic District.

Lafayette Lodge continued to grow and prosper under the leadership of many fine and distinguished Masons. Early meetings were held in Freemasons' Hall which was located on Washington Street in Roxbury. The Lodge moved to larger and more elegant quarters in Masonic Hall at 2307 Washington Street, Roxbury in June 1892. It remained at that address until 1901 when it again moved to the new Masonic Temple at 171 Warren Street also in Roxbury.

As the years progressed the character of the Roxbury community began to change as suburban growth of the Boston area began to expand. Those changes caused concern among the members of the Lodge, and in 1958 the Lodge graciously accepted an offer from Orient Lodge to relocate to its present home, the Masonic Temple, on Day Street in Norwood. The Temple in Roxbury was eventually demolished by the Boston Redevelopment Authority.

On December 12, 1904, Washington Lodge presented Lafayette Lodge with a portrait of General Lafayette as an expression of Brotherly love. This portrait hangs in the Percy room of the Norwood Temple.

In 1912 a friend of the Lodge, not a Brother, presented the Lodge with a letter written and signed by General Lafayette. This letter is on display tonight in the Percy room.

The early 1950's saw considerable growth of Masonry in the suburban Boston area. H. Prescott Tucker and Enos Fancey, Past Masters who lived in the Town of Dover, gathered together Masons living in that town and petitioned Grand Lodge to form a new Lodge to be located in Dover. On September 19, 1952, forty-three Master Masons signed the By-Laws of Dover Lodge, as Charter Members. Many of the members of the new Lodge had been raised in Lodges in Natick and Needham. In an effort to allow as many brethren to become line officers, the By-Laws of Dover Lodge specifically limited membership to 125 members, except that no more than 5 candidates could be raised in a given year.

Dover Lodge met in the old Dover Congregational Church building, the church having merged with the Unitarian Church across the street. The members of Dover Lodge agreed to repair the building, and pay the heating expenses in exchange for the use of the facility; which could then be used by the church youth group, and other church organizations.

As membership slowed in the early 1980's, Dover Lodge found it increasingly difficult to fill the stations with officers and at its Regular meeting on Thursday, May 2, 1985, the members voted to petition the Grand Lodge to merge with Lafayette Lodge.

September 7, 1985 began a new chapter in the History of our Lodge. R. W. Ronald E. Jackson, Acting Grand Master, presided at a Special Communication of Grand Lodge whereby Lafayette and Dover Lodges were united into a combined Lodge under the Charter of Lafayette Lodge to be known as Lafayette-Dover Lodge.

William Kershaw served as Master 1948-49 and his son James B. Kershaw in 1973-74. Another of his sons, William H. Kershaw, served as Master of Rising Star Lodge, Stoughton. Arnold G. C. Andersen, Sr. served as Master 1961-62, again in 1971-72, and also as Master of the 37th Lodge of Instruction. He installed his son, Arnold G. C. Andersen, Jr., our presiding Master, in September. Another of Andy Sr.'s sons, Jim, is currently Senior Steward. It should be noted that Wor. Andy Sr. cannot be with us for this celebration, as he is seriously ill in the Hospital. Our thoughts and prayers are with him and his family this evening.

In a reversal of the father - son tradition Harry K. Knudsen served as Master 1984-85 while his father Harry R. Knudsen served the next year 1985-86. Another family foot-step note concerns Loren and Harold Hiltz who were brothers that served consecutive years as Master; Loren served 1943-44, his brother Harold 1944-45.

Robert Gair who presided in 1952-53 installed his son as Master of Rising Star Lodge, Stoughton in 1988.

Several of our Brethren; both past and present, have been honored by the Grand Lodge with the awarding of the Joseph Warren Medal for Distinguished Service to Masonry, those current members are Arnold G. C. Andersen, Sr., Horace F. Scott, and Gerald R Michael.

On this, the occasion of our 125th Anniversary, we wish to thank the members of our Mother Lodge, Washington Lodge, now situated in Lexington, who assisted greatly in our early years; the Brethren of Orient Lodge, Norwood for their support and warm firendship in our years as tenants of the Norwood Masonic Temple; and our friends in Lodges of the Hyde Park 25th Masonic District, with whom we share a special kinship.

In closing, I should like to repeat the last sentences of the 100th Anniversary History.

"With faith in the future, with a devoted and loyal membership, with the direction of an able line of officers, and with the help of Almighty God, Lafayette-Dover will continue to guard and nurture that with which it has been so solemnly entrusted - the teachings and principles of Freemasonry." 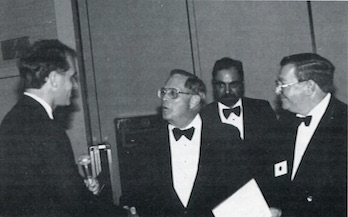 The Lodge traces its origin to the Institution of Lafayette Lodge, an offspring of Washington Lodge of Roxbury, in 1865. The first Master of the Lodge was R. W. Charles J. Danforth, who later served the Grand Lodge as Junior Warden. He died while in that office. The Lodges of the 3rd District erected a monument, a broken column, in his memory at his grave in Forest Hills Cemetery.

The Grand Master presented 60-Year Veteran pins to Bros. Charles J. Tinkham and William B. McAlister. Instead of being escorted around the Lodge, the members greeted the 60-year Brothers in the East.

Wor. Nathan Nuel Rosenhek presented a reading of "The Lambskin" and conducted a memorial service for departed Brethren. Washington Lodge of Lexington presented an hourglass to the Lodge to commemorate the occasion.

Following the introduction of the head table, Massachusetts State Senator William Keating, whose district includes Norwood and most of the Hyde Park 25th District, was introduced. Sen. Keating presented M. W. Bro. Darling and Wor. Bro. Andersen with a Senate Resolution marking the 125th Anniversary of the Lodge.