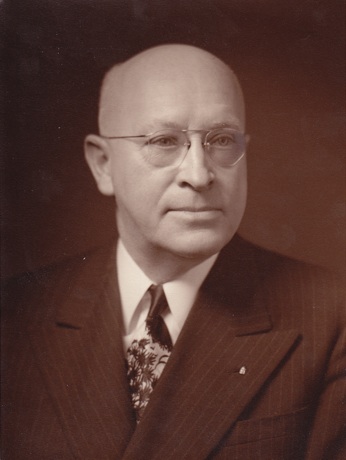 Right Worshipful James Matthew was born in Schenectady, New York, on February 27, 1884, the son of John and Harriet (Weekes) Matthew, and died in Springfield, Massachusetts' on May 21, 1955.

R.W. Brother Matthew was educated in the public schools in Schenectady and spent his early life there. He worked with his father as a pattern maker at the General Electric Company in Schenectady before moving to Indian Orchard in 1920. Here he was associated with the Chapman Valve Company where he was Supervisor of Patterns, retiring from that position on October 1, 1954.

On April 26, 1913, he married Maude Remington, who survives him, as do their son, James R., and their daughter, Mrs. Jennie Difley, and eight grandchildren. Brother Matthew was an enthusiastic and devoted Mason, exemplifying at all times the true spirit of friendship and brotherly love. He received his degrees in Indian Orchard Lodge, Entered Apprentice Degree on March 8, 1923; Fellow Craft on April 16, 1923, and Master Mason on May 17r 1923.

He was appointed to office in Indian Orchard Lodge in the Fall of that year and served as its Master in 1929. He was elected Treasurer of his Lodge in 1944, serving in this office at the time of his death. He served as District Deputy Grand Master for the Springfield Thirty-third Masonic District in 1932 and 1933, by appointment of Most Worshipful Curtis Chipman. He was awarded the Joseph Warren Distinguished Service Medal for meritorious service to the Craft on March 13, 1948. He served as Junior Grand Warden of the Grand Lodge of Massachusetts in 1950, and as Grand Representative of Occidental Grand Lodge in Cali, Columbia, from 1952 until his death. He received the Henry Price Medal in 1950. He held honorary membership in Longmeadow Lodge, Longmeadow; Samuel Osgood Lodge, Springfield; Newton, Wilbraham; Elm Lodge, West Springfield; Mount Orthodox Lodge, West Springfield; Eden Lodge, Ware; Charles C. Spellman Lodge, East Longmeadow, and his own Indian Orchard Lodge.

In the Ancient Accepted Scottish Rite he received the Degrees in Evening Star Lodge of Perfection on May 3, 1949; in Massasoit Council, Princes of Jerusalem on May 17, 1949; in Springfield Chapter of Rose Croix on April 7, 1949, and in Connecticut Valley Consistory on April 28, 1949.

He was a member of Melha Temple, A.A.O.N.M.S., and served as Potentate in 1952. He held honorary membership in twenty-six Shrine Temples throughout the United States. He became a member of Dwight Clark Chapter, No. 148, Order of the Eastern Star, in 1937 and seryed as Worthy Patron in 1941.

His pleasant smile and warm hand clasp brought him a host of friends and he was known and well liked wherever he went. A true personification of Masonry.

His passing leaves a void in our hearts, but the memory of his friendship will remain with us always.