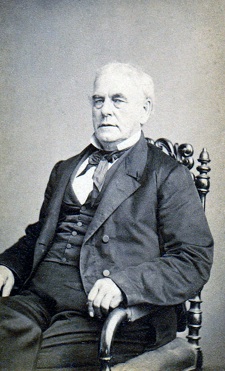 The M.W. Grand Master stated that it became his sad duty to announce to the Grand Lodge the decease, on the 13th of May last, of our venerable Bro., R.W. Bradford L. Wales, M.D., a Past Grand Warden of this Grand Lodge. His almost unvarying attendance upon our Communications during the memory of our oldest members, until within a year or two past, has made his presence and his record familiar to us all. He was one of the staunchest adherents to the Fraternity during the whole period of the anti-Masonic persecution. The sacrifices he made, and the trials he endured in the support and defence of our much-abused cause made it only the more dear to him, and made it also eminently fit and proper that wxe should place on record our appreciation of his spirit and his service. To that end W. Bro. William H. Balkam, Jr., Master of Norfolk Union Lodge, of Randolph, had been requested to prepare a suitable memorial of our deceased Brother.

Another of the few links that bind these with the early and trying days of our beloved Institution was sundered on Tuesday, May 13th, 1890,. by the passage to the Celestial Lodge above of the spirit of R.W. Bro. Bradford L. Wales. Bradford Leonard Wales was born in Randolph, Mass., May 1, 1804. He was the son of Dr. Jonathan Wales and Fanny Cobb-Wales, and the eldest of five children. He was educated at the Milton and Phillips Academies, and graduated from Middlebury College, Vermont, in 1824, at the age of twenty. He studied medicine with his father, received his medical degree at Harvard College, and was in the active practice of his profession until 1850. He married in 1831, and had one son, who survives him. As a citizen he took an earnest interest in public affairs, and filled many positions of trust and responsibility in his native town. He was elected to the State Senate in 1840, was a memberof the House of Representatives in 1853 and 1854, and was a candidate for Governor in 1854. He was a member of the Presidential conventions of 1852 and 1860, a Presidential Elector in 1852, and a member of the constitutional convention in 1853.

In 1850 he was also elected a member of the corporation of Middlebury College, and for many years was a regular attendant at the annual commencement of his Alma Mater. In religion he was a Baptist. His sixty-six years of Masonic life began during his senior year at college, when he was made a Mason. Later he became a member of Norfolk Union Lodge, Randolph, Mass., and so remained until a few years before his death. He was its Worshipful Master from June, 1829, to June, 1830, and again in 1836, 1837, 1855, and 1856. He was elected Senior Grand AVarden of the Grand Lodge of Massachusetts in 1856, and was a regular attendant upon, and an earnest participant in, its Quarterly Communications until his failing strength forbade.

He was the last surviving member of the forty-two Randolph signers of the Masonic manifesto of 1831. At the age of twenty-six he carried the banner in the procession at the laying of the corner-stone of the first Masonic Temple in Boston in 1830. He was a man of the strongest convictions, and was esteemed for his strict adherence to his estimate of right. Through the gloomy days of our Masonic history he held to his principles with that tenacity which characterized him in everything, and, with that noble and devoted band, over whose signatures was published the immortal 'Declaration,' which turned the tide of public opinion in regard to our beloved Institution, he suffered social and religious ostracism, faithful to his obligations, and trusting the future for vindication. He died at the age of eighty-six years.

Thus, Brethren, one by one, are the patriarchs of our venerable Institution becoming tenants of the narrow house appointed for all the living. Silently they pass from our sight to meet the 'well done' of our Heavenly Father. Soon these scenes amid which they moved, the objects of our love and veneration, will know them no more forever. We may not be called to endure what they suffered, but, with, their shining example before us, we shall betray our trust if we do not, as they have done, leave the world better for our having lived in it.

"On May 16, I being absent from the State, R.W. Deputy Grand Master Benj. A. Gould attended the funeral of our deceased Brother R.W. Bradford L. Wales, at Randolph. He was accompanied by

REMARKS AT THE FEAST OF ST. JOHN, DECEMBER 1881

In a former number we noticed the celebration of St. John's Day last by the Grand Lodge of Massachusetts, and the Veterans present who signed the "Declaration of 1831." The speeches are reported in proceedings of Grand Lodge, and we quote that by R. W. Bradford L. Wales, who was introduced as "the Brother who carried the banner at the laying of the corner-stone of the first Masonic Temple in Boston, October 14th, 1830."

Brother Wales gave an amusing description of his experience on that occasion. He said he was then twenty-six years of age, measured six feet in height, and weighed two hundred and thirty pounds; his present weight was one hundred and five pounds, and he was at a loss to tell where the difference had gone. He presented himself in Faneuil Hall on the morning of the 14th of October, 1830, prepared to join in the procession, but not expecting to take any conspicuous part in it. One of the Marshals, in looking about for assistance, happened to notice Bro. Wales, and, remarking that he was "a stout young man," asked him if he would carry the banner. Bro. Wales consented, not knowing how much of a task he had undertaken. When the banner was brought forth it seemed to him as big as a blanket, and a good deal heavier. He, however, did not flinch but hoisted it before him, and, with the assistance of a brother on each side to steady it, he managed to stagger under it, until he arrived in front of Park Street Church. The wind had been blowing a gale during the whole march, but at this point a sudden and furious blast, sweeping down from Boston Common, struck with tremendous force the broad expanse of the blanket banner, and snapped the staff short off. As the silken folds trailed in the dust, there went up a shout of triumph from Benjamin F. Hallet, Henry Gassett, and a crowd of other violent and rabid anti-Masons who had congregated there. But the banner was soon raised, and borne through the remainder of the day; somewhat shorn, however, of its imposing dignity.

Brother Wales also gave a very interesting narrative of the contest which was carried on for a year in the town of Randolph, over the continuance of the Rev. Benjamin Putnam in his pastorate of the Baptist Church. Brother Putnam was an ardent Freemason, a member of Norfolk Union Lodge, and for several years its Chaplain. He was also Grand Chaplain from 1829 to 1833, inclusive. The anti-Masons singled him out as the butt of their wrath. The church, by a small majority, voted to require him to renounce Freemasonry or resign his office. Their action, however, was of no effect without the concurrence of the parish. This could not be obtained, as a majority of the parish were either Masons, Jacks or Bats. (The Jacks were open and active defenders of Freemasonry. The Bats were rather indifferent, and stood aloof.) This state of things continued for more than a year, meetings of both church and parish being held monthly, and often semi-monthly. At length the church finding itself powerless, offered, byway of compromise, to be content if Bro. Putnam would agree to abstain from attending Masonic meetings. On the Sunday succeeding this proposition he gave his answer, from the pulpit, to a congregation which crowded his church to its utmost capacity. He took for his text the nth verse of the 6th Chapter of Nehemiah: "And I said, Should such a man as I flee? and who is there, that, being as I am, would go into the Temple to save his life? I will not go in." Of course the answer they received was not very satisfactory to the anti-Masons. At a parish meeting held soon after, a leading anti-Mason, after a violent tirade against Masonry in general, and Bats in particular, offered the following preamble and resolution :—

To the great discomfiture of the mover and his friends, the resolution was adopted by a unanimous vote. A committee of three anti-Masons was appointed; but though fifty-three years have elapsed, the committee have not performed their task, or made any report.

Bro. Putnam at length concluded that his usefulness as a Christian minister was ended in that locality, and therefore resigned, and removed to Springfield, Mass.