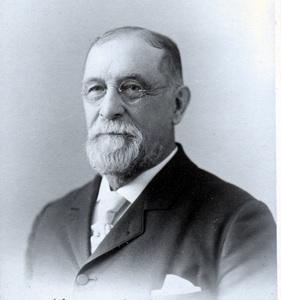 "In compliance with the request of the Most Worshipful' Grand Master, the committee appointed to prepare a suitable memorial to the memory of Right Worshipful Brother Charles Henry Norris submit the following :

" Memories : Fold them up;
Lay them securely by;
What avails it now to dream of the past!
The future for you and I."

"It is hard to realize that Brother Norris is dead. It seems only yesterday that he was here with us, a daily companion, moving along with the same even tread and temperament, with a kind word for every one, ever wearing a smile, and scattering sunshine in his pathway.

"He died on Sunday, Aug. 31, 1902, after a long and painful illness, at his home in Salem, in the seventy-seventh year of his life. Salem was his life-long residence, he having been born there April 26, 1826. He was the son of Jeremiah and Dolly (Safford) Norris. His father, Jeremiah, was an heir of the Hon. John Norris, a prominent East India merchant, who contributed largely to the frigate Essex, who endowed many churches, and whose widow, Mary Norris, was a founder of the Andover Theological Seminary. Through the Hon. John Norris, the deceased inherited a considerable interest in the French Spoliation Claims.

"Brother Norris' grandfather, Edward Norris, for many years town clerk and notary public, was the sixth in a line of Edwards, directly descended from the Rev. Edward Norris, who sailed from Bristol, England, in 1639, and became, in 1640, minister of the First Church in Salem, where his name stands fourth in the list of preachers. His activity as a theologian and a patriot is well known. Brother Norris was the fortunate possessor of two books from the pen of this, ancestor, which were printed in London in 1636. His signet ring and his caryed oaken chest are still treasured in other branches of the family.

"Brother Norris received his education in the public schools of his native city, and graduated from the old Salem English High School. At the early age of seventeen he was one of Salem's business men, and remained so until about 1883, when, having acquired a competency, he retired. Notwithstanding his active business life, he found time for public affairs. He served his city as a member of its Common Council in 1860, '61, '62, and held many other important positions. He enjoyed social life, and was President of the Colonial Club of Salem at the time of his death, and his reviews of the events of the year written in verse were most instructive and entertaining.

"Brother Norris' Masonic life covered a period of nearly thirty-seven years. He was made a Master Mason in Essex Lodge, A.F.. and A.M., of Salem, Oct. 4, 1864, and served as its Worshipful Master in 1869 and 1870. He was District Deputy Grand Master of the Eighth Masonic District in 1885 and 1886, receiving the appointment from the late. Most Worshipful Grand Master, Abraham H. Howland, Jr.. He :was elected Senior Grand Warden of the Most Worshipful Grand Lodge of Massachusetts, Dec. 11, 1889. He was the founder and first president of the Past Masters' Association of the Eighth Masonic District, and was most active in the formation of the Past District Deputies' Association of Massachusetts, and one of its most earnest supporters; giving freely of his time and talent to.the eminent satisfaction of his associates.

"The Capitular Degrees were conferred upon him; in; Washington Royal Arch Chapter of Salem, the Royal Arch Degree Feb. 2, 1865, and he served with ability as High Priest in 1867 and 1868. He was elected Right Excellent Grand .Scribe of the Grand Chapter, Oct.; 13, 1868, serving one year as the custom is, thus becoming a permanent member of that Grand Body.

"He received the Cryptic Degrees in Ahasuerus Council of Royal and Select Masters of Lowell, Mass., in 1866, soon taking membership in Salem Council, where he was one of the leading spirits in reorganizing and: infusing hew life and vigor into that venerable Council. He was elected Thrice Illustrious Master, Jan. 11, 1867, which office he filled acceptably for two years, and in December, 1870, he was elected Most Illustrious Grand Master of the Grand Council of Royal and Select Masters of Massachusetts, and re-elected in 1871 and 1872. He received the Orders of Knighthood in Winslow Lewis Commandery, K.T., No. 18, making application therefor at the first conclave of that Commandery, held Feb. 27, 1865. The degrees of the Ancient Accepted Scottish Rite to the thirty-second degree inclusive were conferred upon him in Boston Consistory, March 16, 1866.

"The pre-eminent ambition of Brother Norris was the happiness, enjoyment and contentment of his home, family and friends. He was true and loyal, and with his lovable character, his friends were legion. - To know him was to love him, and there was much in his life worthy of emulation. He was passionately fond of music, and found inspiration in, every thing that could make music, and as has been said: 'Deep, tender and true were his impulses; strong, loyal and honorable were his convictions. Prompted by the noblest sentiments, impelled by a generous heart, and actuated by the strictest integrity, he was ever a loyal citizen, a true friend and Brother, a kind, indulgent father, and a.most devoted husband. Such is his record, written in the hearts and memory of man.' He laid down to rest, as the weary traveller, to pleasant dreams, and fell asleep in death silently, softly and sweetly, as a sleeping child, and has

" Passed to a world that suffering never knew,
A world of peace, with all the good and true."

"The funeral services of Brother Norris were held in the Universalist Church of Salem, Sept. 3, 1902, and were largely attended. The Masonic services were under the auspices of Essex Lodge. Representatives of the various Masonic Bodies of which he was a member were present, to pay their last tribute of respect to the memory of our departed Brother.

"The darkness of His providence
Is starlit with benign intents."