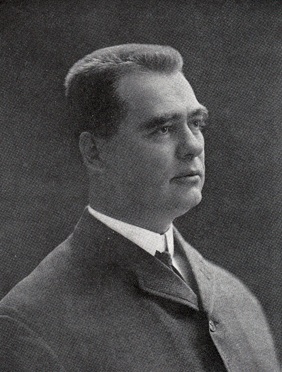 Right Worshipful Brother Emerson was born in Hillsboro, New Hampshire, May 29, 1862, and died in Brockton, October 17, 1934. At an early age, after the death of his father, he was taken to Haverhill by his mother. He was educated in the Haverhill public schools and at the Bryant and Stratton Commercial College in Boston.

He entered the shoe manufacturing business and in 1885 took a position in Brockton where he spent the rest of his life, partly in the shoe business and partly in financial affairs. He was City Treasurer for thirteen years and served the city in other capacities. From 1906 until his death he was connected with Brockton banks.

He took his degrees in Paul Revere Lodge in 1889 and was its Master in 1895 and 1896. He served as Deputy Grand Master in 1904 by appointment of Most Worshipful Baalis Sanford. He later became one of the Charter members of Baalis Sanford Lodge. He became a Trustee of the Masonic Education and Charity Trust in 1909, and the Treasurer in 1926, remaining in that position until his death.

This is a brief epitome of a very full and active life, devoted to the service of the community and of the Fraternity which he loved so well. He was honored and loved by all who knew him, and his passing leaves a sad break in our fellowship.

A pillar of strength to our Institution has gone from our midst; one whose industry, skill, and integrity are worthy of emulation through all future years.

Right Worshipful Brother Emerson was born in Hillsboro, New Hampshire, May 29, 1862, the son of Jacob and Cordelia (Haselton) Emerson. His father died when he was quite young and his mother moved to Haverhill, Mass., where he graduated from the public schools, later taking a course at the Bryant & Stratton Commercial School in Boston. Thus equipped, he entered the employ of a shoe manufacturer in West Charlton. At the age of twenty four he became bookkeeper for L. M. Reynolds & Co., shoe manufacturers of Brockton. He came to Brockton as an entire stranger, but his sterling character and financial ability were quickly recognized and he was called to many positions of responsibility.

In 1894, at the age of thirty-one, he was elected City Treasurer of Brockton, being said at that time to be the youngest man in the Commonwealth to hold that position. He filled that office for thirteen years. Later he served the city for five years as Sinking Fund Commissioner, and at the time of his death he was a Trustee of the Brockton Public Library. He also served as Chairman of the 1917 Liberty Loan. drive, directing the work of subscribing the city's allotment. In 1907, he resigned as City Treasurer and for twenty years was credit manager and vice president of the Churchill & Alden Shoe Co., makers of the Ralston Shoe. In 1906, he became a Trustee of the Brockton Savings Bank and was elected first vice president in 1924, which office he held at the time of his death. He had been a director of the Campello Co-operative Bank since 1922.

In 1916 he was married to Miss Clara B. Count, a teacher in the Brockton High School, and for fifteen years he and Mrs. Emerson enjoyed an ideal married life. Her sudden death in May, 1931, was a shock from which he never fully recovered. The Masons of Brockton delighted to thrust honors upon him, electing him to every office in their gift and he honored every position he held. In all four of the Grand Bodies of the Commonwealth, he held positions of honor and responsibility.

Brother Emerson passed away October 17, 1934. His funeral on Friday, October 19, attended by a large number of distinguished Masons of this and neighboring states, was just as he had planned it to be, merely a gathering of his friends to wish him Godspeed in a simple and beautiful service.

In his engagement book was found a clipping of a poem. It is remembered that he had committed this to memory, and recited it at a recent Masonic meeting. It contains lines which seem to be so descriptive of his point of view toward life that it is most fitting to close this memorial with them.

Let me not feel the glamour of the world,
But walk calmly in my path. Give me
A few friends who will love me for what I am,
And keep ever burning before my vagrant steps
The kindly light of hope; and though
Age and infirmity overtake me, and I
Come not within sight of the castle of my dreams,
Teach me still to be thankful for life,
And for Time's olden moments that are
Good and sweet; and may the evening twilight
Find me gentle still.