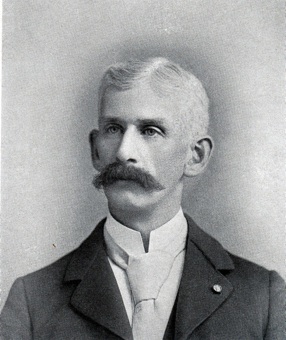 Brother McKim was brought to Boston as a child and educated in the Boston schools. The greater part of his business life was spent in the leather business. Later he took up the life insurance business.

Brother McKim was in the fifth generation of Masons direct descent, his Great Grandfather, James McKim, having been made in Federal Lodge No. 15, of Washington, D. C., at a date now lost but recorded as "prior to 1811." The Lodge was then in the obedience of the Grand Lodge of Maryland. It is now No. 1 on the roster of the Grand Lodge of the District of Columbia.

Brother McKim took his degrees in Eliot Lodge in 1888. At the next annual meeting he was appointed Junior Steward. From that time until his death he was continuously in active service of the Lodge and the Grand Lodge as an officer or member of one of the standing committees.

He was Master of Eliot Lodge in 1894, 1895, and 1896. He served as District Deputy Grand Master for the Fourth Masonic District in 1899 and 1900 by appointment of Most Worshipful Charles C. Hutchinson and Most Worshipful Charles T. Gallagher, and was Senior Grand Warden in 1903. On his retirement from that position he was appointed a member of the Committee on Charters and By-Laws and remained on that Committee for the remainder of his life. His faithful and efficient service here, backed by his long experience, was of the greatest value to the Grand Lodge.

Brother McKim was a member of St. Andrew's Royal Arch Chapter, of Roxbury Council, Royal and Select Masters, and of the Scottish Rite bodies in Boston. He was also a Charter member of Loyalty Lodge.

Brother McKim took his Masonry very seriously. The posts in which he served were to him opportunities, rather than distinctions. Except in his Lodge and in Grand Lodge he never sought nor held office. He concentrated his energies upon that which he loved best and most desired to serve.

He was not affiliated with clubs or fraternities outside of Masonry. He was, however, proud of the fact that he was a member of the First Class in Succession of Father in Massachusetts Commandery of the Military Order of the Loyal Legion of the United States.

His passing leaves a gap in our ranks which it will be hard to fill and a place in our hearts which will always be sacred to his memory.

R.W. John A. McKim, of Cambridge, Massachusetts, was born in Toledo, Ohio, July 4, 1861, the son of John W. and Margaretta (Fisher) McKim, and deceased August 18, 1933. He was educated in the Boston Latin and English High Schools. After leaving school he became engaged in the leather business, but he later took up life insurance and was active in this business until about the time of his decease.

He gave long and valuable service on the Committee on Charters and By-Laws of the Grand Lodge, being a member from 1904-1913, and from 1927 until his decease. He also served for shorter periods as a member of the Board of Commissioners of Trials, and on the Committee on Curiosities of the Craft.

He was made a Royal Arch Mason in Saint Andrew's Chapter, January 7, 1891, and received the Cryptic Degrees in Roxbury Council, May 27, 1901. The Degrees of the Ancient Accepted Scottish Rite in Boston Lafayette Lodge of Perfection, Giles F. Yates Council, Princes of Jerusalem, Mt. Olivet Chapter of Rose Croix, and Massachusetts Consistory, were conferred upon him in 1921.

He was the original organizer, an Honorary and Charter member of Loyalty Lodge, of Boston, and an Honorary member of United Lodge, of Brookline, and Eliot Lodge of Jamaica Plain. Brother McKim also held membership in the First Class in Succession of Father in Massachusetts Commandery of the Military Order of the Loyal Legion of the United States.

Brother McKim was a very familiar figure in the Grand Lodge, and in the Temple. He was a thorough Masonic student, much interested in the interpretation of the Ritual of the Fraternity, and also in its history, philosophy, and law. He gave very generously of his time in all of these fields, was ardent in promoting the interests of the Craft, devoted and constant in his activities. Brother McKim was courageous in expressing his own views, even though he happened to be in the minority. His service to the Fraternity, and to the Grand Lodge, was a long and valuable one, and his geniality and attentiveness to duty will be treasured while our memory endures.

Funeral services were held on Sunday, August 20, 1933, in the Forest Hills Crematory Chapel.

"One by one we miss the faces
Of the friends we once possessed;
One by one their names are graven,
'Ceased to Labor!' 'Home!' 'At Rest!'