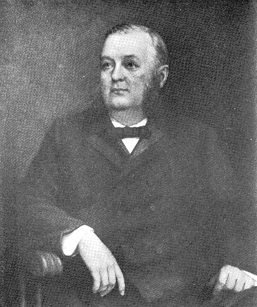 Since last we came together, Brethren, in Grand Lodge, the sad angel of death has been in our midst and taken away him who was our most honored member. If we might choose, though, the way in which we should go, no better lot than that of our beloved Grand Master will happen to any of us. He fell in the midst of life and while in the customary attendance upon the demands of his business, without long and lingering pain and suffering. He left to his widow and children a priceless heritage: a spotless name and an unsullied reputation. With the good will and tender love of all who knew him, the boat has passed from our shore, out upon the dark river and across to the portals of the Celestial Lodge, into the presence of the Supreme Master, our Creator and Heavenly Father. We mourn not for him, but for our own loss, in that we must learn to do without the genial greeting, the cheerful smile, and the warm hand-grasp of our friend and Brother.

"Freed from the strife of this world and the scorn of it,
Peaceful he sleeps 'neath the emerald green,
Never ambition, nor sorrow that's born of it,
Sceptre or cross can afflict him again.
Stars will watch o'er him; silence lament for him;
Soft murmuring breezes re-echo his knell;
Bird-note and leaf-murmur tenderly blent for him;
Comrade and Brother and friend, fare thee well."

During more than two score years he had been a Mason; a member of three Lodges meeting in this Temple: Columbian, Revere, and Eleusis; a charter member of the last two and also Past Master of both. For a quarter of a century he had been connected with this Most Worshipful Body; and in the heart of no one beat a more fervent devotion to the Fraternity, nor a greater willingness to give it the best of his time and services.

How glad we all were when in December he was elected unanimously Grand Master of Masons of this Commonwealth. It was characteristic of Richard Briggs that his first official act looked to the provision of a Masonic Home for poor and needy Brethren and their widows and little ones. It was not for him to build a Temple, nor to free it from the burden of oppressive debt. These privileges and distinctions belonged to other eminent men who had preceded and now survive him. A great and worthy charity, however, relieving sorrow and assuaging pain, founded during his administration, would have been a privilege and distinction full of satisfaction to his kindly nature. No better tribute to his memory can we provide than to carry on. and complete this beneficent enterprise.

The tidings of his death came unexpectedly to many of us, while away from our homes and places of business on vacation. I personally must ever regret that a summons, though despatched on electric wings, could not reach me in time, that I might return for the last sad look upon the mortal remains of our beloved Brother. On your behalf, though, and as your representative, I have made official announcement of our loss to Masons throughout the world, and have directed the draping of our altars for a period of three months.

And now, my Brethren, called so suddenly to the important responsibilities of this high office, deeply conscious of my own failings, with many misgivings, and yet with a resolute purpose to perform Avith all my mind and with all my strength the whole of its duties, however great and however small, I appeal to you for support and aid, to your generous charity to bear with my faults and to your wisdom to counsel and cheer me, and I can assure you, my Brethren, on my part the most sincere thanks and devotion of a grateful heart.

On Saturday, July 29, 1893, the Grand Master of Masons in Massachusetts, M.W. Richard Briggs, died suddenly, after a brief illness. The news of this great loss shocked and grieved the Masonic Fraternity, and fell as a great blow upon the hearts of those who knew and loved him. Chosen to this high office on Dec. 14, 1892, and installed on the 27th of the same month, he had hardly completed the first half year of the term for which he was elected.

Although he accepted the office at a sacrifice of his personal convenience, he threw himself into the performance of its duties with characteristic energy, and in the brief period in which he was permitted to work, he won the respect and admiration of the whole jurisdiction. For more than one hundred years the Grand Masters of this Grand Lodge have all lived through their terms of office, and not since 1787 has this Body been called to mourn the loss of a Grand Master in office. The second to hold that office in Massachusetts, Robert Tomlinson, who succeeded Henry Price, was commissioned by the Earl of Loudon, Dec. 7, 1736. He was supposed to have died in 1740, on the Island of Antigua, but the circumstance and date of his death were never known. His successor, Thomas Oxnard, was commissioned Sept. 23, 1743. On Tuesday, June 26, 1754, he died, after a lingering illness, in the fifty-first year of his age, having held the office of Grand Master for eleven years. His death took place on the day of the celebration of the Feast of St. John the Baptist.

On Oct. 1, 1755, Jeremy Gridley was installed as Grand Master, with great pomp and ceremony, at Concert Hall. He was the Attorney General of the Province, and was distinguished for his classical attainments and learning. He served as Grand Master until his death, on Sept. 10, 1767. His funeral was attended by the Grand Lodge, the military and the principal officers of the Province.

His successor, John Rowe, was installed Nov. 23, 1768, and served until his death, on Feb. 17, 1787. These Grand Masters, whose deaths have been mentioned, were at the head of that Body of Masons known as the St. John's or Modern Grand Lodge.

Gen. Joseph Warren organized a Provincial Grand Lodge on Dec. 27, 1769, which was known as the Massachusetts or Ancient Grand Lodge. He served as Grand Master of that Grand Lodge until he was killed in the battle of Bunker Hill, on June 17, 1775.

On March 8, 1777, his Deputy Grand Master, Col. Joseph Webb, was chosen Grand Master, and thus became the head of the first independent Grand Lodge in America, all prior Grand Masters on this continent having derived their authority from the Grand Masters of England and Scotland. He served until his death, on April 26, 1787, except one year, when the office was filled by Dr. [John Warren, a brother of General Warren.

This brief reference to the Grand Masters who died in office shows the importance of the event to the Grand Lodge, and the long time that has elapsed since its previous occurrence.

Richard Briggs(6) was born in Dedham, Aug. 23, 1829. When a boy of sixteen he was employed by Sumner & Co., dealers in crockery, having a store at the corner of Washington and School Streets, in Boston, and at the age of twenty-one became a member of the firm. Ten years later he was sole proprietor of the business and continued it in the same location until his death, thus occupying the same store for nearly half a century. His Masonic career began in 1852, when he became' a member of Columbian Lodge, of Boston. When some of his friends proposed the establishment of a new Lodge in 1856, he united with them and was a charter member of Revere Lodge. In this Lodge he held the offices of Junior Deacon, Junior Warden, Senior Warden and Worshipful Master. He was also a charter member of the Lodge of Eleusis in which he was Senior Warden and Worshipful Master.

In Capitular Masonry he held offices and became Grand High Priest of the Grand Chapter of Massachusetts. He was a member of Boston Council of; Royal and Select Masters. He was much interested in Templar Masonry, receiving the orders of Knighthood in Boston Commandery in 1856. He was a charter member of St. Bernard Commandery, and its first Recorder, holding that office from 1858 to 1885, when he was chosen Eminent Commander. He received all the degrees of the Ancient Accepted Rite, except the Thirty-third and last degree, to which he was elected in September, 1892, and which was to have been conferred upon him, had he survived, at the meeting of the Supreme Council at Chicago in September, 1893.

In this Grand Lodge he served as Junior Grand Warden in 1870. In 1867, and again in 1891, he was elected to the office of Director, which office he resigned on Dec. 14, 1892, when he was chosen to fill the highest Masonic office in this jurisdiction, that of Grand Master.

Richard Briggs was remarkable not only for his integrity and uprightness in all the relations of life, but for the fidelity and care with which he performed all the duties entrusted to him. He would not accept any position of trust and responsibility unless he could see his way to do all that was required or expected. In the office of Grand Master he was absolutely faithful to the trust, even when suffering from the illness which finally and suddenly snapped the thread of life and removed him from our midst.

To his personal friends his presence had a charm and a blessing that can never be forgotten, and to all assemblies and to all men and Brethren he was a welcome visitor. Let us remember him with reverence and love, and strive to imitate his virtues.