St. John's Grand Lodge of Boston was established April 30, 1733) when Henry Price, of Boston, was appointed Provincial Grand Master by Viscount Montague, Grand Master of Free and Accepted Masons of England. This was known as the Modern Grand Lodge.

The Massachusetts Grand Lodge was constituted May 30, 1769, when Dr. Joseph Warren was appointed Grand Master in Boston and within one hundred miles of the same, by the Earl of Dalhousie, Grand Master of Scotland. This was known as the Ancient Grand Lodge.

On March 8, 1777, the Massachusetts Grand Lodge avowed itself an independent Grand Lodge.

On Dec. 6, 1782, the Massachusetts Grand Lodge explained and reaffirmed its independence as a Grand Lodge.

It was under the Massachusetts Grand Lodge that Amity, United States, Unity, Essex, and St. Peter's were constituted.

On May 1, 1778, a petition was presented to the Massachusetts Grand Lodge of Masons in Boston by Brother John Piemont, and others, asking for a Charter to erect a Lodge in Danvers to be known as United States Lodge.

The petition was granted.

On December 4, 1778, R. W. Brother John Piemont presented, in Grand Lodge, a list of the officers of United States Lodge of Danvers as of record October 6, 1778:

On the first day of April, 1779, the Brethren (of the Essex Lodge, Salem) were notified to meet at the house of Bro. John Butler, to act on business of importance. Being met together to the above notice, the following communication was laid before them:

To the Brethren of the Fraternity of Salem

From Gentlemen, your humble Servants and affectionate Brothers,

We, the Committee of the United States Lodge of Danvers, thinking it unnecessary for two Lodges, so near together as Salem and Danvers, and being assured it will be highly detrimental to the Craft, are willing to become one body, and unite with our Brethren in Salem, it being the most convenient place to hold a Lodge. We, therefore, propose the following for your consideration, viz.:

The Salem Lodge declined to accede to the request of the above committee of five, purporting to be "the Committee of the United States Lodge of Danvers."

One must notice the prominence of John Stacey in the Danvers Lodge, in the petition to the Essex Lodge, and in relation to Amity Lodge. Who was he? Massey, in his History of Freemasonry in Danvers, p. 21, says Stacey was a Danvers man, and in the list of Beverly residents belonging to United States Lodge on page 16 in Massey's History Stacey is given. There is not, then, absolute certainly as to his home. It would be easy to surmise many things. He was in United States Lodge; he wanted to have its Charter returned and a Lodge for the "community" formed in Salem; he wanted the Essex Lodge to give up the Charter gained for them by the special aid of the Grand Master; he wanted United States Lodge moved to Beverly, and in the end he got a Lodge formed in Beverly, and became its first Master. What a busy-body! Or was it conceit, or ambition? Is he the one referred to in the records regarding Essex Lodge, which records state that, in the Grand Lodge, the Salem men found great opposition from "a person from Danvers."

And today nobody knows who he was; no one knows for certain where he lived!

At a meeting of the Grand Lodge "upon emergency," April 13, 1779 . . . the petition of Nathaniel Greenwood, Francis Yates and Joseph Wyer—in behalf of United States Lodge, — setting forth the disadvantage of holding their Lodge at Danvers and praying it might be removed to the town of Beverly was read.

The Grand Lodge agreed "Unanimously to grant the prayer of their petition, and the said United States Lodge is in future to be held in the said Town of Beverly and all their proceedings there to be firm and valid, to all purposes and intents, as though the name of Danvers had not been mentioned in their charter of erection."

On April 27, 1779, nine members of United States Lodge signed a petition to the Massachusetts Grand Lodge protesting against the removal of the Charter and Lodge to Beverly.

Motioned and Seconded —That the vote respecting the United States Lodge: at the last Grand Lodge Night; be Suspended, by Reason of a petition being Presented,

Read & debated at the Grand Lodge dated 27th Instant, Signed by Nine Members of that Lodge against a removal to Beverly.

"That the two Petitions presented from the Members & Committee of the United States Lodge, to this Grand Lodge, Respecting their Removal to Beverly — be cop(p)ied & sent by the Grand Secretary to the Master of that Lodge, that he be desired to Call his Lodge together immediately, and know the Minds of the Members, (Consistent with the By Laws) Respecting a Removal of it — and that they transmit to the Grand Lodge a Copy of their proceedings & the result of their determinations, to be further acted upon.

At a meeting of the Grand Lodge, Held at Masons Hall, on Special Occasion, Friday Evening May 21st, 1779.

Having by writing Reported the determination of their Lodge at their last meeting; and answer'd to Several pointed Questions Made by this Grand Lodge particularly to the Constitution, Page 314. They withdrew.

"The Grand Lodge then Came into the following Resolve:

"The Petitioners having been heard (this Evening) It fully Appeard to the Grand Lodge; that there were more than Five Members, who, are willing to Support said Lodge. It is therefore the Unanimous Opinion of this Grand Lodge, that no Lodge may be Removed to any other Town, So long as Five Members Continue to Support it. We Therefore Recommend to the Members of Said Lodge they Cultivate Brotherly Love, and Friendship—the Cement of Masonry —that the Vulgar may not take the Advantage of any little difficulty that (may) Arise Among Masons, to bring the Craft into disrepute.

"Voted the G. Secry furnish the United States Lodge, by their Committee — with a fair Copy of this Resolve."

This is a list of the Members of United States Lodge, Danvers, 1779—

Nine of the above were opposed to the removal of the Lodge to Beverly. Seven of above favored removal to Beverly. Four, who belonged in Danvers, were absent at sea and in the Continental Army. [ The members living in Beverly were reported as follows:

There evidently was a disturbing influence in the United States Lodge, as the Proceedings of the Grand Lodge prove.

On page 277 of the "Proceedings in Masonry of the Massachusetts Grand Lodge" is this statement:

"A Petition of Wm. Grovy and others from the Town of Beverly praying for a Charter of Erection for holding a Lodge in said Town by the name of Amity.

"Voted, the prayer be Granted."

The meeting of the Grand Lodge, granting the prayer of Grovy and others, was held at Free-Mason Hall, Boston, Friday Evening, September 3, 1779, the third Quarterly Communication.

The following is a copy of original Return from Amity Lodge in the Archives of Massachusetts Grand Lodge:

At a meeting of the Brethren of Amity Lodge, being duly notified to meet and make choice of the following officers for S'd Lodge:

The following is the list of names of Members of Amity Lodge for 1780 from Grand Lodge Archives:

The following is list of "officers elected for the Amity Lodge, the year ensuing:"

Essex Lodge, Salem, on St. John's Day, December 27, 1780, had the brethren of Philanthropic Lodge, Marblehead, Amity Lodge, Beverly, and United States, Danvers, as their guests. They attended Service in St. Peter's Church, and dined at Capt. Goodhue's Tavern. "After dinner a number of Public toasts were drank, attended with music." In 1781, the Beverly, Danvers, and Ipswich Lodges were again the guests of Essex Lodge on December 27; they attended service in St. Peter's Church, had dinner and a concert in the evening. 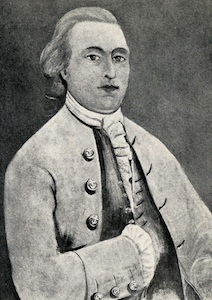 List of Members of Amity Lodge, compiled from all sources available.

At least eighteen of these men were Captains or officers of Privateers and other American vessels during the War, and seventeen were in the Army as officers; all the others were closely associated with these patriots.

There were without question many other members of the Craft in Beverly during the Revolutionary times, and it is likely that some of them were "made" in Amity Lodge, and became members of the Lodge, while others "made" elsewhere became members of Amity. It must be remembered that many men who were made Masons did not have an opportunity to sign the By-Laws, either because they were absent when elected members, or because, as often happened, the Secretary did not have the book of By-Laws in the Lodge Room, or for some other reason.

Amity Lodge, being composed almost altogether of Army Officers and Sea-Captains, it is easily seen that the Lodge meetings would not have many in attendance, and as this condition continued for some years, and members of the Lodge died or moved away the Charter was at last surrendered in 1789.

Before closing it may be worth mentioning that Bro. John I. Baker, in an address in Liberty Lodge on the occasion of the presentation of Rt. Wor. Bro. John B. Hill's portrait, that it was a tradition in Beverly that before the Revolution Frances Edward Yates, the first Junior Warden of Amity Lodge, had received the degrees of Freemasonry in England, and had been given authority, subject to certain limitations, to institute a Lodge, or Lodges, here. This cannot be true for Bro. Yates first came to this country as a prisoner in an armed privateer owned by Thorndike and Brown of Beverly; he was brought to Salem, and "enlarged." He went to Danvers, and married on February 22, 1777. He came to Beverly in 1778. So you see, he could not have been sent here by English Masons of either the Modern or the Ancient Line before the Revolution. The Moderns had a Provincial Grand Master here before the Revolution. The Scottish Grand Lodge had also a Provincial (Ancient) Grand Master here for Boston and within 100 miles of Boston. Is it possible that the English Ancient Grand Lodge, established in 1751, and with its first Grand Master in 1753, would have sent a young man to establish the Jurisdiction of a third Grand Lodge in the vicinity of Boston? If so, there ought to be some proof of it besides the obscure hints conveyed in Bro. John I. Baker's address as reported in the Records of Liberty Lodge. We know the Secretary of Liberty did not always get the speeches in accurate form.

In the Records of Liberty Lodge, it is stated that one of the Brethren in a speech said that there were at least three other members of the Fraternity from Beverly who, during the Revolutionary War, sat in the Washington (Travelling) War Lodge. These men were named Benjamin Shaw, an Ensign, later Lieutenant, and later Adjutant to General Patterson; the second was a Captain John Green; the third was Doctor Elisha Whi