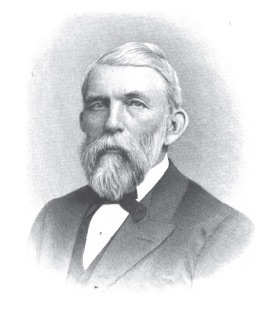 Lyman Klapp was born in the town of Westhampton, Mass., July 16, 1827. He died at his home in Providence, R. I., Sept. 27, 1889. He was the son of Bela Parsons and Cynthia (Carr) Clapp, and a descendant of Captain Roger Clap, of Salcombs Regis, Devonshire, England, who came to New England in 1630. The family name, variously spelled in the old English annals, is Saxon, and can be traced back to the time of Edward the Confessor.

Captain Roger Clap's life, after his arrival in this country, was a busy and eventful one. His integrity, ability and energy of character were acknowledged by the colony, and during his long life, he was called to fill many important civil and ecclesiastical offices. In 1665 the General Court placed him in command of "The Castle" in Boston harbor, the chief fortress of the Province — now Fort Independence, which post of peculiar trust and honor, he held for twenty-one years.

He died at the age of eighty-two. At his funeral the Ancient and Honorable Artillery Company, of which he was a member, preceded the body to King's Chapel Cemetery, Boston, the Governor and General Court following the family as mourners.

Bela P. Clapp, the father of the subject of this biographical notice, was born in Westhampton and received his education at Westfield Academy. He occupied many positions of honor, trust and responsibility in his native town and county. He was, as was also his father, Sylvanus Clapp, chosen Representative to the State Legislature for many successive years, sometimes by a unanimous vote.

Lyman Klapp devoted his early life to the study of chemistry, and for some years was a student in the laboratory of Mr. Edward N. Kent, New York. In 1853, he sailed for the east coast of Africa, with the intention of making a journey into the interior of that continent. While stopping at Cape Town, South Africa, he perfected his arrangements to meet the celebrated African traveller, Dr. Livingstone, who was then exploring the region opposite Mozambique. But upon arriving at the port of Mozambique, owing to the wars between the coast tribes, it was impossible to penetrate into the interior, and after remaining upon the coast several months, which time he spent in studying the productions of the countries adjacent to the coast, and the customs, laws and traditions of the native inhabitants of that region, he reluctantly returned to the United States.

After his return he became interested in a series of experiments designed to determine the best methods of extracting oil from the sesame seed, at that time exported in large quantities to France. It was the result of his investigation which gave to this country and to the world, a new and important industry. He not only devised methods but also invented the machinery necessary for the materialization of those methods in practical commercial results, and these inventions are so peculiarly his own that his manufacture and refinement were the first successful attempts to extract and refine oil from the seed of upland cotton.

With the aid of outside capital he established the Union Oil Company in Providence, with which he was connected and to which he gave the best part of his business energy, until the day of his death, and which under his management became a controlling factor in the cotton oil industry. This business claimed the most of his time and attention, yet he responded frequently to outside demands that came from those who desired to utilize his good judgment and business abilities in enterprises with which they were connected.

He received the degrees of Capitular Masonry in Providence Royal Arch Chapter, No. 1, in 1855, and the Cryptic degrees in Providence Council, No. 1, of Royal and Select Masters. He received the orders of Knighthood in 1857 in St. John's Commandery, No. 1, and dimitted to become a Charter member of Calvary Commandery, No. 13. Upon an establishment of Ancient and Accepted Scottish Rite bodies in Providence, in i860, he received the degrees therein conferred. In i860 he was elected High Priest of Providence Royal Arch Chapter, and in 1862, Grand High Priest of the Grand Chapter of Rhode Island.

He was appointed Deputy Grand Master in the Grand Lodge of Rhode Island by Grand Master Thomas Vincent, May 15, 1882. He served in that office two years, when he was elected to the highest office. He held the office of Grand Master for three terms—from May, 1883 to May, 1886. He laid the corner stone of the Burnside Memorial in Bristol in September, 1883, and the corner stone of Freemasons Hall in Providence, June 7, 1884, and February 3, 1886, dedicated the Masonic rooms in the same building. The two latter events serve specially to connect his name and services with Freemasonry in Rhode Island. His administration was intelligent, positive yet catholic, and well calculated to exert, as the present writer believes it did, a wholesome, uplifting influence upon the Craftsmen in the jurisdiction.

Bro. Klapp was a devout Christian and ardently attached to the polity and faith of the Episcopal Church. His love for Freemasonry, strong and ardent as it showed itself, was yet held subordinate to his love for the Christian Church. When the end came, suddenly at the last, but not unlooked for, as he had full knowledge for years that the disease which had fastened upon him, might result fatally at any moment, it found a strong believer ready to cross the valley of the shadow of death because he trusted in Christ and had hope in the life immortal.

His funeral was solemnized October 1, in Saint Stephen's Church, Providence. The services consisted of the Burial Office of the Episcopal Church said by the rector. Rev. Bro. George McClellan Fiske, S. T. D., and the celebration of the Holy Eucharist by the Bishop of Fond du Lac, assisted by the rector and the Rev. Walter Gardner. There were no Masonic services at the burial, the wishes of the brother being followed in this respect. Many brethren and friends were present at the church, however, and at the place where the mortal remains of the worthy brother were laid away. The Grand Lodge, at its annual communication, May 19, 1890, received a fitting eulogy upon the character of the deceased, prepared by Bros. N. Van Slyck, Cyrus Van Slyck and W. B. Blanding, and approved the same and ordered the memorial to be transmitted to the family of Bro. Klapp.