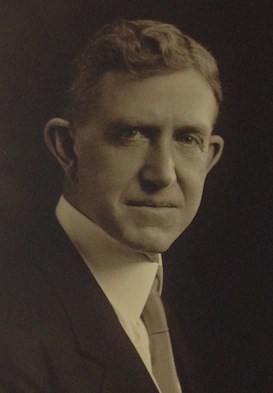 R.W. Bro. James Young, Jr., was one of the most beloved and highly respected Masons in Massachusetts. Raised in Bethesda Lodge, Brighton, Massachuserts, on April 16, 1901, he became its Worshipful Master in 1913, and after moving to Salem, affiliated with Starr King Lodge on February 9, 1914. He was elected an Honorary Member of Amity Lodge of Danvers in 1951. He was District Deputy Grand Master for the Fifth District in 1920 and 1921, by appointment of Most Worshipful Arthur D. Prince, Grand Master, and was Deputy Grand Master of the Grand Lodge in 1929, by appointment of Most Worshipful Herbert W. Dean, Grand Master. He served for many years as a member of the Board of Directors of the Grand Lodge and of the Board of Trustees of the Masonic Educaticn and Charity Trust, holding both of those offices at the time of his death. He received the Henry Price Medal in 1929, and the fifty-year Veteran's Medal in 1951.

He received the Royal Arch Degree in Washington Chapter, Salem, on June 14, 1914; Super Excellent in Salem Council on February 23, 1916; the Order of the Temple in Winslow Lewis Commandery on September 17, 1914, of which he was Eminent Commander in L927. He served as a member of the Finance Committee of the Grand Commandery.

He received his Scottish Rite Degrees in the Salem Bodies and in Massachusetts Consistory; served as Thrice Potent Master of Sutton Lodge of Perfection and as Most Wise Master of Emanuel Chapter of Rose Croix. He received his Thirty-third Degree September 15, 1931.

Brother Young received his early education in the public schools of Albany, New York, graduating from the l{igh School in 1889. He entered business in Brighton, Massachusetts, the following year as a clerk in the employ of William H. Monroe, a well-known cattle dealer. In 1898 he was placed in charge of the Boston office of the Morris Packing Company of Chicago, after the Morris Company bought out Mr. Monroe. From his position as bookkeeper and credit man with the Morris Company, Brother Young went to the Brighton Savings Bank as Auditor in November,1907. He became a Teller in 1909. In 1910 he was elected a Trustee and Vice-President and later President, before moving to Salem in 1912 to take the post of Treasurer of the Salem Savings Bank. In 1929 he was elected President of the Salem Savings Bank and was re-elected to that position each year until his death.

R.W. Brother Young was an outstanding man in his community, not only as the President of the Salem Savings Bank, but in practically all of the civic programs carried on in that city. He was appointed by Governor Ely as a member of the three-man Special Commission to revise the state savings bank laws in 1932, and was connected with many activities in the City of Salem, including Treasurer and Trustee of the Y.M.C.A., Treasurer and Trustee of the Salem Hospital, Trustee of the Plummer Farm School of Salem, Trustee of the Salem Seamen's and Orphans' Friend Society, and a Director of the Salem Masonic Temple Association, the Naumkeag Trust Company, Salem Morris Plan and Salem Hotel Corporation. He was regarded by the Masons of Salem as their outstanding representative.

Of a kindly nature, with a friendly smile, he made friends wherever he went. Modest and unassuming in manner, he carefully concealed his many acts of kindness and charity, but was always ready with a helping hand to assist anyone in trouble or need. He will be greatly missed by his host of friends who will long hold him in fond remembrance.