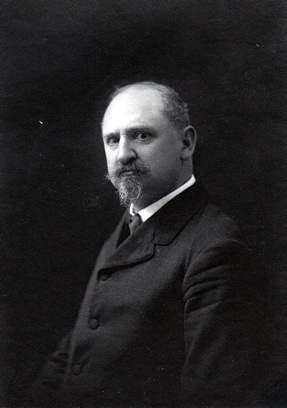 "It is with sincere regret that I announce the death of R.W. George Holbrook Rhodes. He died at Poland Springs Me. on Thursday, October 19, 1916. His sixty-eight years of earthly life were all spent in Taunton where he won and retained the respect of its people. Brother Rhodes was very active in Masonic affairs and freely gave of his strength and time to every Masonic duty. His example lives, his memory abides, his light shines upon our path."

George Holbrook Rhodes passed beyond the veil and from mortal sight on October 19, 1916, at Poland Springs, Maine, where he had gone in the hope of regaining his health. In his passing we have lost a zealous worker in the cause of Masonry and his native town a good and loyal citizen.

He was born at Taunton, August 11, 1848, and was the son: of Marcus Mortom and Rowena Adeline Rhodes. He received his education in the public schools of the city of his birth, graduating from the High School, of that place in July, 1866, where his studious habits and close application to his work endeared him to the teachers and pupils with whom he was associated and laid the foundation for a long and successful business career.

On his graduation at the age of eighteen years, he entered the employ of his father and" later was admitted to partnership; and when the firm was incorporated in 1888 as the M. M. Rhodes & Sons Company he was elected. its treasurer and served in that capacity until his death.

In both private and public affairs the interests of his home city drew very largely upon his time and attention; in 1877 he was elected a member of the Common Council and served continuously from that date until 1887. In 1883 he was honored by being made the president of that board and retained that office until his retirement from public affairs.

His business ability and sound judgment in financial matters were early recognized by the local banking institutions where he was called upon to accept positions of trust and responsibility. For a number of years he served as director of the Taunton National Bank and trustee of the Taunton Savings Bank.

By virtue of being a member of the Common Council and President oJ that Board, he became a Trustee of the Public Library, a most congenial task, as it brought him in contact with educational matters, in which he was deeply interested, and was one of the causes of his taking up work in connection with Wheaton Seminary, now Wheaton College for young women, at Norton, Mass., and while he never held any official position in the management of the affairs of that school, he devoted. a large amount of time to its interests and was one of its most active workers.

During these years of a busy life in the material concerns of business and finance in a growing and prosperous community where it seemed at times that there were hardly enough hours in the twenty-four to meet the demands upon his attention, he still found time for service in the religious and social life of his city, being a member of the Broadway Church and one of its most active workers and supporters. He was also treasurer of the Young Men's Christian Association when it was organized.

At an early age he became interested in Masonry and the Fraternity gained in Brother Rhodes one of its most ardent and loyal members. Until the time of his death he never allowed an opportunity to pass where he could be of service, and it was service of a kind that will endure when those of us who knew him shall have passed from the stage of active life aud others have taken our places.

He was initiated in King David Lodge April 22, 1870. In March, 1873, he dimitted from King David Lodge and took membership in Charles H. Titus Lodge of Taunton, and was elected its Worshipful Master in 1877, serving two years.

On June 20,1872, he was exalted a Royal Arch Mason in Keystone Royal Arch Chapter, of Foxboro, Mass. He received the Cryptic Degrees in Taunton Council Royal and Select Masters in January, 1873, and served as Thrice Illustrious Master from February to October, 1885. He was Knighted in St. John's Commandery No. 1, Knights Templars of Providence, R. L, on January 19, 1874, and after serving in the various subordinate positions was elected Eminent Commander at the Annual Conclave in December, 1880, serving one year. He was also a Trustee of St. John's Charity Fund from March 7, 1887, until the time of his decease.

His interests did not terminate in the Grand Lodge with the expiration of his term as Junior Grand Warden. IIe was elected a member of the Masonic Education and Charity Trust in December, 1894, and served for several years as Clerk of that Board, occupying that position until the time of his death.

Such is a brief record of one who lived an active life of service and now they tell me he is dead. It is a foolish fashion of speech and not true, -not until the mountains crumble to their bases, the lakes and streams are dried up to their parched beds, for there is no such thing as death, and it is possibly better that he should have passed on as he did, for now when we again meet we shall not meet a Brother grown old in years and. weakened with toil, but we shaIl find our friend and Brother himself once more, strong, vigorous, at fullest prime, and together we shall:journey on under new and brighter skies to mightier and larger opportunities for service to our kind.

FROM COUNCIL OF DELIBERATION, 1917 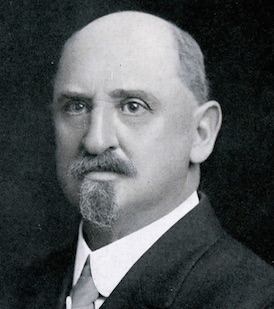 From Proceedings of the Massachusetts Council of Deliberation AASR NMJ, 1917, Page 38:

George H. Rhodes, 33°, of Taunton, who passed away at Poland Springs October 20, 1916, was one who was not only well known and much respected in our Rite, but in other departments of Masonic work as well, especially in connection with our Grand Lodge and its charities.

He was born in Taunton in 1848, and after a high school education became connected with his father in the business of manufacturing, being at the time of his death Treasurer of the M. M. Rhodes & Co., one of the leading houses in its line.He was. interested in every form of public activity, educational, civic, and religious, besides his Masonic work. He had been a thirty-third degree Mason since 1897, and thereafter to the time of his death he had not missed a meeting of the Supreme Council. He was one of the most beloved and respected citizens of, Taunton and was naturally called to the service of the City Council over which he presided.

He was trustee of the Public Library, director of the National Bank, trustee of its Savings Bank, and filled other positions of trust to which a man devotes his life and work for the public good.

At the funeral services held at his house there were of the active members of our Supreme Council Leon M. Abbott, 33°, Chas. T. Gallagher, 33°, Frederick W. Hamilton, 33°, of Massachusetts, and George H. Holmes, 33°, of Rhode Island, while from the honorary list Benjamin B. Gilman, 33°, Henry G. Jordan, 33°, and James M. Gleason, 33°, of Massachusetts, and Norris G. Abbott, 33°, of Rhode Island, joined their sorrows with a mourning family and many friends; Brother Abbott and myself attended the body to the grave.

From Proceedings of the Massachusetts Council of Deliberation AASR NMJ, 1917, Page 101:

Brother Rhodes was born in Taunton, Mass., August 11, 1848, the son of Marcus Morton and Rowena A. (Williams) Rhodes. He was educated in the public schools in Taunton, and after graduating from the High School he entered business with his father, in which business he continued until the time of his death. He was for years a member of the Common Council, and served as President of that branch of the city government for several terms. He was also a trustee of the Public Library for a number of years.

Brother Rhodes never sought any other public office, but was on many occasions asked to be a candidate for various positions, but declined. He was a director of the Taunton National Bank for several years, and was also a trustee of the Taunton Savings Bank.

He was treasurer of the M. M. Rhodes & Sons Company, manufacturers of buttons, one of the leading business enterprises of Taunton.Brother Rhodes was greatly interested in Wheaton Seminary and the present Wheaton College, at Norton, Mass., and while he held no office in the institution he has during the past twelve years officiated as marshal of the Commencement exercises and presided at the last Commencement in June, 1916. He was a member of the Broadway Church, and one of its most active workers and supporters. He was also a member of the Taunton Winthrop Club.

Brother Rhodes was made a Master Mason June 22, 1870, in King David Lodge, Taunton, Mass. He was a charter member of Charles H. Titus Lodge, and served as Worshipful Master in 1877-1879. He received the Royal Arch degree June 20, 1872, in Keystone Chapter, Foxboro, Mass. He received the degrees of the Cryptic Rite on January 28, 1873, in Taunton Council, and served as Thrice Illustrious Master in 1885.

He received the Order of Knight Templar January 19, 1874, in Saint John’s Commandery, No. 1, of Providence, R. I. He was elected Eminent Commander in December, 1880, and served one year.Brother Rhodes was a member of Boston Lafayette Lodge of Perfection, Giles Fonda Yates Council, Princes of Jerusalem, Mount Olivet Chapter of Rose Croix, and Massachusetts Consistory.

On September 21, 1897, he was crowned an honorary member of the Supreme Council of the thirty-third and last degree of the Northern Masonic Jurisdiction.He was Past District Deputy Grand Master of the twenty-third Masonic District, a permanent member of the Most Worshipful Grand Lodge, and trustee of the Masonic Educational and Charity Trust from December 1894, to October 19, 1916, the date of his death. He was also a Pe Grand Lecturer of the Grand Commandery of Massachusetts and Rho Island October, 1884, to October, 1885, and at the time of his death was Hospitaler of Massachusetts Council of Deliberation.

Brother Rhodes was twice married. His first wife died fourteen yea ago. Three years ago he married his second wife, who survives him. I also leaves a son, Marcus A. Rhodes, and a daughter, Nancy B. Rhode children of his first marriage.

They’re passing away, those dear old friends,
Like a leaf on the current cast;
With never a break in the rapid flow,
We watch them as one by one they go
Into the beautiful past.