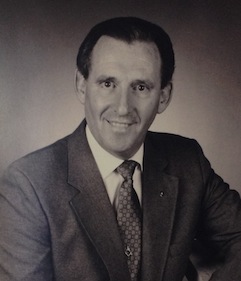 Brother Davies was born on October 11, 1939 in West Ham, London, England. He was the son of Ernest William and Daisy M. (Hubble) Davies. According to English tradition, anyone born in London within the sound of the Bow Bell is considered to be a Cockney. David was such a person but one would never recognize the fact for he never developed that Cockney accent that the world associates with the London Cockneys. This was probably due to David's love for the sea, because in 1955 at age 16 he sought his parents' permission and received it to enlist in the Royal Navy as a Boy Cadet. As a Boy Cadet, his first duty is to complete his formal education, as well as serving in the Royal Navy. Upon completion of his education and when he reached his 18th birthday, he could transfer into the regular Royal Navy as an able-bodied Seaman which he did and thus served his country for a total of nine years. While in the Navy, he served on the Aircraft carrier H.M.S. Victorious, and spoke often of his love for the sea and pride in his ship. His ship took him to many far away places, including the North Atlantic, Mediterranean, and Far East. At one port of call in Rosythe, Scotland, this young English lad was smitten by a young Scottish Lassie, Janet B. Hunter. After a proper courtship, including meeting her family, they were married on October 7,1961. David remained in the Royal Navy until 1965 when he retired and entered the Scottish Police Academy in Tullyallen, Fife, Scotland.

After graduation, he served as a Lanarkshire Constable until 1969 when he and his family immigrated to the United States and settled in Feeding Hills, Massachusetts. He joined Western Massachusetts Electric Company in its Service Department where he was employed for 26 years. In 1995, he was offered early retirement which he accepted and retired as a Senior Business Representative. Still unable to accept total retirement, he joined Bradley Limousine Company as a driver and could be seen all hours of the day and night picking up and driving passengers and flight crews to Logan, Bradley, or Kennedy or wherever else they wished to go. His winning smile, his cheerfulness, graciousness, and gentlemanly conduct won him many friends and accolades.

Before leaving Scotland, Brother Davies joined Caldercruix Saint John's Lodge 1314 in Caldercruix, Scotland. He received his Entered Apprentice Degree on April 21, 1964, and affiliated with Elm-Belcher Lodge of Agawam, Massachusetts, on September 8, 1980. He served the Lodge as Worshipful Master in 1984 and, for many years, was the Lodge Proxy to Grand Lodge. He served Grand Lodge as Grand Sword Bearer in 1990 and 1992, Grand Marshal in 1991, and Junior Grand Warden in 1993. He was a member of all the York Rite and Scottish Rite Bodies in Springfield and was the presiding King of Kingsway Royal Arch Chapter and Commander-in-Chief of Connecticut Valley Consistory at the time of his passing. He also served as Thrice Potent Master of Evening Star Lodge of Perfection and received his 33rd Degree in 1994 in Cleveland, Ohio. David was a member of Saint Matthew's Conclave Red Cross of Constantine and was serving as Prelate. He held membership in Melha Temple, AANOMS and belonged to the Director's Staff, Past Masters unit and participated in the Ritual Cast.

Brother Davies' life was not an easy one for he was born at the beginning of World War II and he and his family suffered through the infamous London Blitz of the 1940's. Many a night he and his family lived in the cramped quarters of the air raid shelters awaiting the all clear to be sounded. He learned from this experience that life is precious and is meaningless unless shared with others. As the air raid shelters were shared with family, neighbors and strangers, he realized that survival was helping everyone without question and without the hope of fee or reward.

David will be profoundly missed by his wife, Janet, his daughters, Karen Horniak and Lisa Davies, and granddaughters, Kate and Alexis Homiak. Also by his mother, Daisy, and sisters Vera Carpenter and Lynn Phillips of Hereford, England.

David's favorite song was entitled, Friends and Neighbors. [n the song it says a man is rich if he has friends and neighbors. By the large attendance of friends and neighbors at his wake and in his beloved Bethesda Evangelical Lutheran Church, where he took an active part in its life, he was fully a rich man.

We shall allmiss our Brother, for he taught us how to live and enjoy every minute of our life and to share with others, and as the organist played the Navy hymn at the conclusion of his service, we all knew that David will always be a part of us.

Sleep well my Brother till we meet again.