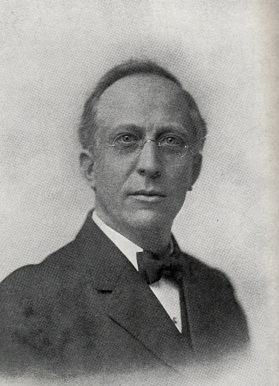 R.W. Brother Schuler was born in Greenfield, September 7, 1865, and died at his home in Montague City, October 28, 1930. He learned the printing trade in his youth, but entered the service of the Montague Rod and ReeI Company, of which he was president at the time of his death. He was a very active and devoted member of AII Souls' Unitarian Church of Greenfield. Thoroughly devoted to the business which he built up and made his own, his other interests were his family, his church, and Freemasonry.

His Masonic servjce was long and wide. IIe became a member of Mechanic's Lodge in 1888 and was its Master in 1897 and 1898. He was District Deputy Grand Master for the Thirteenth Masonic District in 1909 and 1910, by appointment of M.W. Dana J. Flanders. He was Past High Priest of Franklin Royal Arch Chapter, Past Thrice Illustrious Master of Titus Strong Council, and Past Commander of Connecticut Valley Commandery. He was greatly interested in Scottish Rite Masonry and may well be said to have been the father of the Rite in Greenfield. The organization of the Scottish Rite Bodies in that town was due mainly to his initiative and he presided over all three of them, being at the head of Greenfield Council, Princes of Jerusalem, at the time of his death. He received the thirty-third degree and honorary membership in the Supreme Council in 1916.

Brother Schuler's sudden and untimely death removes one of the most active, most useful, and best loved Masons in this jurisdiction. We shall miss him profoundly and it will be long before his place can be filled.

When one passes away whom we knew and loved and honored, and whose face and voice we shall sadly miss for many a day, it is but fitting that, in tribute to his memory, we should recount in brief the story of his life, the record of his works, and speak of the excellencies of his good deeds.

These brief lines but feebly tell of a long service, high honors, rich attainments, rare in radiance and expression of that which is truest and best in individual life and character.

"Life's labor done,
Life's blessings all enjoyed,
Serenely to their final rest they passed,
While the soft memories of their virtues yet
Linger, like twilight hues,
When the bright sun is set."

Right Worshipful Brother Charles William Schuler was born in Greenfield, Mass., on September 7, 1865, and died at Montague City on October 28, 1930. His parents were William and Anne Schuler and his early years were spent in Greenfield., but while he was still a child the family moved to Turners Falls where he received his education in the public schools. On June 24, 1896, he was married in Greenfield to Miss Alice Thomas, u'ho survives him, as does his son, Robert, and a daughter, Alice Louise, also a sister and brother. In his early manhood he went to Boston where he learned the printer's trade; after several years he returned to Turners Falls and entered the employ of the Montague Rod Company as a clerk. His faithful service earned him many promotions till he finally became the Treasurer of what is now known as the Montague Rod & Reel Co. Within recent years he was advanced to the office of President of the Company. He was a Director of the Crocker National Bank, of Turners Falls, and a Trustee of the Western Massachusetts Bankers Association.

Brother Schuler was a member of All Souls Unitarian Church, of Greenfield, and was an active worker in its interests. He served on the Board of the Trustees of the Public Library and also as a member of the School Committee in Montague.

Brother Schuler was raised a Master Mason in Mechanic's Lodge, of Turner's Falls, Mass., on October 9, 1888, and was its Master during 1897 and 1898. He was also an honorary member of Republican Lodge, of Greenfield; Bay State Lodge, of Montague, and Mount Sugar Loaf Lodge, of South Deerfield. In 1909, he was appointed District Deputy Grand Master for the old Thirteenth Masonic District by Most Worshipful Dana J. Flanders, serving for two years. In 1913 he served as Junior Grand Warden of the Grand Lodge of Massachusetts.

Brother Schuler was a member of the Bodies of both the York and Scottish Rite and in these several Bodies he held offices as follows: from 1904 to 1906 he was Excellent High Priest of Franklin Royal Arch Chapter; was Thrice Illustrious Master of Titus Strong Council, Royal and Select Masters, in 1909; and held the office of Eminent Commander of Connecticut Valley Commandery No. 23 of Knights Templar in 1900 and 1901.

In the Scottish Rite branch of Masonry Brother Schuler was crowned an honorary member of the Supreme Council, Thirty-third Degree, at Pittsburgh, Pennsylvania, on September 19, 1916. He was Thrice Potent Master of Greenfield Lodge of Perfection from 1912 to 1917, and Most Wise Master of Greenfield Chapter of Rose Croix in 1926 and 1927. At the time of his death he was Sovereign Prince of Greenfield Council, Princes of Jerusalem. He was also a Past Lieutenant Commander of the Springfield Consistory, and was a member of the Royal Order of Scotland. For his distinguished services in Masonry, Brother Schuler was awarded the Henry Price Medal.

Among his many Masonic activities it might be mentioned that Brother Schuler was one of the organizers as well as the first President of the Franklin-Hampshire Past Masters Association. Most of his time outside of his business was devoted to Masonry and his Masonic affiliations brought to him an unusually large and widespread acquaintance, while his pleasing personality gained for him numberless friends, both within and outside of Masonic circles, making him one of the best known men in Franklin County.

It can be truly said of Brother Schuler that, he was faithful in aII his undertakings. His conception of Masonry was on a very high plane and his influence was ever used to maintain and advance its standards. Truly, he was cut down in the midst of his usefulness. Masonry suffers a great loss in his passing.

"Eternal Life forever is.
Death but a mortal dream.
Those gone from sight
Still live and love;
They only absent seem."

FROM COUNCIL OF DELIBERATION, 1931

From Proceedings of the Massachusetts Council of Deliberation AASR NMJ 1931, Page 45:

Illustrious Charles William Schuler was the son of William and Anna Partenheimer Schuler. He attended the public schools of Greenfield and Montague, and at the age of eighteen he entered the printing establishment of Cecil T. Bagnall in Turners Falls. In 1888 he became affiliated with the Montague City Rod Company serving that concern faithfully in many capacities for over forty years and was President of the company at the time of his death. Mainly through his untiring service this company now enjoys the reputation of being the largest manufacturing concern of its kind in the world.

His interests were varied and he participated freely in the best activities of Franklin County. He had served his Town as a member of the School Committee for several terms, a Trustee of the Public Library, a Director of the Crocker National Bank, and had been an active member of the Greenfield All Souls Unitarian Church, for many years, where his funeral was held. •He is survived by his widow, Mrs. Alice Thomas Schuler, a son, Robert William Schuler, and a daughter, Anna Marie Schuler.

Masonry probably held the deepest interest for I11. Bro. Schuler outside his business activities. He was undoubtedly the outstanding Masonic character of this section of the State, and greatly beloved by all the brethren, among whom he had a most extensive acquaintance. His advice on Masonic matters was frequently sought, and his wise, calm judgment generally adopted without question. He was raised in Mechanics Lodge, A. F. & A. M., October 9, 1888 and served as Worshipful Master in 1897-1898, District Deputy Grand Master in 1909-1910, and was elected Junior Grand Warden of the Grand Lodge of Massachusetts in 1913. In 1900 and 1901 he was Eminent Commander of Connecticut Valley Commandery and was a life member of the Massachusetts and Rhode Island Past Commander's Association. He was Excellent High Priest of Franklin Royal Arch Chapter in 1894 and 1896, and in 1909 he S served as Thrice Illustrious Master of Titus Strong Council of Royal and Select Masters.

He received the Henry Price Medal from the Grand Lodge of Massa�chusetts for distinctive service to Masonry, was organizer of the Past Masters’ Association and an Honorary Member of all the Blue Lodges in his District.

The Scottish Rite bodies in Greenfield owe much to I11. Bro. Schuler, as it was mainly through his initiative that they were formed. For many years ho has been lovingly referred to as the “Father of Scottish Rite Masonry in the Valley of Greenfield.” He was the first Thrice Potent Master of Greenfield Lodge of Perfection, serving during the years 1912 to 1917. In 1926 and 1927 he was Most Wise Master of Greenfield Chapter of Rose Croix, and at the time of his death was Sovereign Prince of Green�field Council Princes of Jerusalem. He was also Past Lieut. Commander of Connecticut Valley Consistory, a member of the Royal Order of Scotland and of Melha Temple A. A. O. N. M. S.On September 19, 1916, at Pittsburgh, Pennsylvania, he was crowned Sovereign Grand Inspector-General 33, Honorary Member of the Supreme Council of the Northern Masonic Jurisdiction. He was the first frater to receive this honor in the Valley of Greenfield.

Words are inadequate to express our sorrow in the loss of III. Bro. Schuler. Eulogy is unnecessary for such a brother, he represented the highest expression of human conscience and character, and leaves behind a sweet and enduring memory of noble and efficient service.