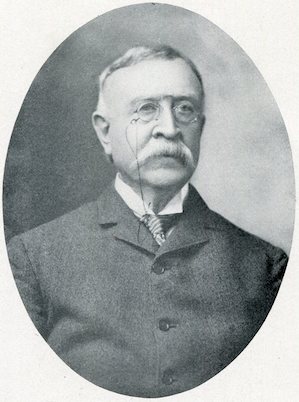 "The passing away of Right Worshipful Bro. Samuel Brigham Spooner, for many years a permanent member of this Most Worshipful Grand Lodge, removed a distinguished, if not the most illustrious, Mason of the Connecticut Valley. He was born in Springfield, Mass., Nov. 2, 1830, and died in Springfield, March 29, 1909. The city of his birth and death was his home for seventy-nine years. He attended the public schools and was valedictorian of bis class in the high school; he graduated with honor from Yale University, a member of the celebrated Class of 1853, which contained in its membership some who afterwards were among the most eminent men of the country.

"In 1861 he was elected City Clerk of the City of Springfield, which office he resigned the following year to enlist and to go to the Civil War with the Forty-sixth Regiment, Massachusetts Volunteers, as Captain of Company A. The regiment was gathered together from the valleys and mountains of Western Massachusetts, and Company A from the first families of the City of Springfield. Major Spooner was mustered out of service in July, 1863, and was at once elected Register of Probate for Hampden County, which office he held at his decease, after forty-six years' service, being the oldest Register of Probate in the State.

"He was Mayor of Springfield in 1872 and 1873, Commander of the E. K. Wilcox Post of the Grand Army, President of the Forty-sixth Regiment Association, First Captain of the Old Peabody Guards, Captain of Company G, Massachusetts Volunteer Militia. Soon after returning from the war Major Spooner married Miss Jennie Bishop, of Springfield, who died in 1878. He leaves a son, Arthur Lincoln Spooner, of New York City, and a daughter, Mary E. Spooner, a teacher in the public schools of Springfield.

"Thus runs the record of a long and honorable life. For more than fifty years he was an active, enthusiastic Mason. In nearly every Lodge in Western Massachusetts his voice has been heard. His impressive and accurate rendition of the ritual, his ability to portray in pleasing speech the principles, the benefits and the beauties of our institution, his every endeavor to set forth its moral and intellectual advantages and point out precepts and regulations which should be the invariable practice of every Mason, together with his ever courteous and cheerful manner, his honorable and upright life, his willingness to give his time and ability for the interest of the Order, endeared him to all the Brethren with whom he came in contact.

"Whoever saw him without a pleasant smile, a friendly word, a hearty greeting? His love for the Order knew no bounds, no time so valuable that it could not be given, no labor so arduous that it was not cheerfully performed.

"As Grand Marshal he had command at our large Masonic parades; his military experience gave him peculiar ability as Commander of the Knights Templars; his dramatic talent, often called into service by charitable associations, was most valuable in the work in the Scottish Rite degrees; and as the standing of any institution depends upon the character of those who assume to be the exponents of its principles, so the honorable position, manhood and integrity of our deceased Brother, in business, civil and military, official and private life, served to give to the Masonic order the exalted and honorable position it now holds iu the community in which he lived.

"Brother Spooner exemplified by his life the tenets of his profession as a Mason: Brotherly Love, Relief and Truth. The whole Older was, to him as one family, a recognition of true friendship you were sure to have under any circumstances. To relieve the distressed, to sympathize with their misfortunes, were principles ever before him; and kindness by word and deed was meted out to Brother Masons without stint, and financial relief at times much beyond his own fair means were given to assist the unfortunate Brother. To be good and true was but to be himself.

"Questions perplexing and embarrassing, urged with persistence almost annoying, at which the patience of the most indulgent would be put to the severest test, he would answer with the greatest courtesy, and by pleasing action and polite methods satisfy all. No worthy person ever found him unwilling to advise again and again.

"Cheerful and happy in life, he had no fear of death; ready when the time should come. I have often talked with him of this matter and know well of his abiding faith in the future. His death was peaceful as the mildest sunset of a summer evening when the suu goes down in tranquil beauty without a cloud.

"For about forty years Brother Spooner and myself walked the Masonic road together; members of the same Lodge, we were also members of each branch of the great Masonic tree that has legal recognition. As officers we have worked together in almost every degree through the York and Scottish Rites, and twenty-five years ago in this building on the same evening we were both crowned Honorary Members of the Supreme Council. He was my nearest and clearest Masonic Brother.