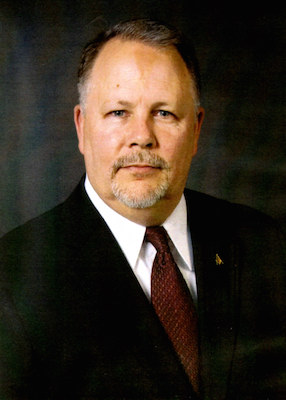 Brother Smith was born in Providence, Rhode Island on October 10, 1952, the second child and son of the late Freeman L. and Mildred H. (Wurtz) Smith. He grew up in Riverside, Rhode Island and was educated in the public school system graduating from East Providence Senior High School in 1971. He continued his education in the Pre-Medical program at Providence College and received a Bachelor of Science Degree with a concentration in Business Management in 1975.

He entered Government Service in 1978 working for the Commonwealth of Massachusetts, Division of registration as an investigator in the enforcement side of the Licensing Division and retired as Supervisor of Investigators for the Office of Investigations.

On October 23, 1982 he was married to Grace Ann Mastropietro of Revere, Massachusetts who is also employed by the Commonwealth of Massachusetts. They presently reside in North Attleboro, Massachusetts.

He is currently a member of the Arnold Mills United Methodist Church of Cumberland and has served on various church committees including Trustee/Treasurer. While residing in Cumberland, Rhode Island he served as a member and Past President of the Arnolds’ Mills Community House. He is a member of the Civil War Re-enactors and Historical preservation group, Battery B, 1st RI Light Artillery.

Brother Smith is a member of Providence Chapter No.1 and Pawtucket Chapter No. 4, Royal Arch Masons and served as High Priest of Pawtucket Chapter in 1999 and 2004. He has served on various Grand Chapter Committees and as Grand Chaplin from 2003 to 2005. he is a member of the Convention of Anointed High Priests and the recipient of the Meritorious Service Award of the Grand Royal Arch Chapter, International.

In Cryptic Masonry, he is a member of Providence Council No. 1 and Pawtucket Council No. 2, Royal and Select Master serving as Thrice Illustrious Master of Pawtucket Council in 2000. He served the Grand Council of Rhode Island as Grand Marshal in 2001, Grand Chaplin in 2003 and Grand Lecturer in 2006. he is the recipient of the Ishe Sodi award. He is the Grand Representative for the state of Louisiana and is a member of the order of the Silver Trowel Council of Anointed Kings.

In the Ancient and Accepted Scottish Rite he is a member of the Valley of Providence and served as Sovereign Prince of the Council of the Princes of Jerusalem from 2005 to 2007. He was coroneted an Honorary Member Sovereign Grand Inspector General, 33rd Degree in Grand Rapids, Michigan in 2005. He is a member of the Royal Order of Scotland.

He is a member of the Rhode Island Shriners, Ancient Arabic order Nobles of the Mystic Shrine and serves on the ceremonial degree team and is a member of Providence Court No. 71, Royal Order of Jesters. He is a member of Moslem Grotto, Mystic Order of the Veiled Prophets of the Enchanted Realm and is presently serving as Marshal.