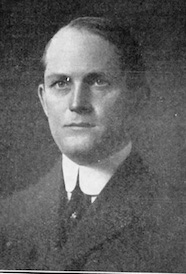 The present Grand Master of Rhode Island is a man who has faithfully served the Craft in many capacities and the many friends of Most Worshipful Grand Master Dexter in Massachusetts will be pleased to learn of his preferment to the distinguished office he now holds.

The following sketch is that of a man preeminently fitted by training and ability to serve well the fraternity he loves so well and for whom he has consistently striven:

Henry Clnton Dexter was born May 12. 1869. in the village of Central Falls, at that time a part of the town of Smithfield, Rhode Island, but which next became, by act of the legislature, a part of the town of Lincoln, and subsequently the same portion of that town was incorporated as the City of Central Falls. Thus, without change, Brother Dexter'S legal residence has been in two towns and one city.

He is the sen of Theodore K. Dexter. P. M. of Jenks Lodge, No. 24, and Harriet Emma (Tingley) Dexter. His education was obtained in the public schools of his native town and the Bryant & Stratton Commercial School. he graduating therefrom in 1886. His first place of employment was in the office of Greene & Daniel Manufacturing Company, as junior desk bookkeeper and later as treasurer for a period of ten years, serving with that corporation for a period of twenty-five years.

Brother Dexter's activities in Masonic bodies are as follows: Made a Mason in Union Lodge No. 10 of Pawtucket and is a Past Master of that lodge: a past H. P. of Pawtucket R. A. Chapter. No. 4; member of Pawtucket Council. No. 2. R. & S. M; Past E. C. of Holy Sepulchre Commandery, K. T. No. 8; Past G. C. of the Grand Commandery of Massachusetts and Rhode Island: Past President of Massachusetts and Rhode Island Association of K. T. Commanders; a member of R. I. Consistory A. & A. S. R.; and Past Potentate, Palestine Temple, A. A. O. N. M. S.

Politically he is identified with the Republican Party, having served in many capacities in the interests of that organization. He was chairman of the school committee of Central Falls for four years and served on the committee for ten.