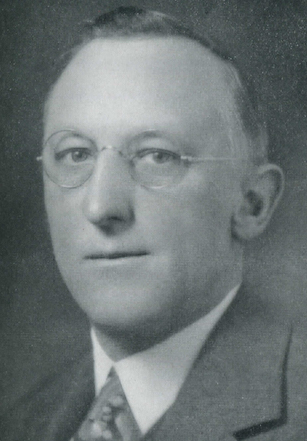 Right Worshipful Rutherford Endicott Smith was born at Lynnfield, Massachusetts on December 26, 1878, the son o{ Henry E. and Mary L. (Bassett) Smith. He died peacefully at his home in Newton Centre on July 17, 1969, in his 91st year.

Brother Smith was educated in the Lynnfield Public Schools, Wakefield High School 1897; Salem Commercial School 1898, and an instructor there from 1899 to 1901. He was admitted to the Bar following his graduation from Boston University Law School in 1904.

He married Miss Bertha Bailey on December 15, 1915. This union was blessed with two children, Endicott and Mrs. Ruth A. Buzzard, who survive him. Mrs. Smith deceased on December 3,1943. There are several grandchildren.

As a banker and civic leader, Brother Smith was prominent. He was elected a Trustee of the Dorchester Savings Bank in 1923 and became its President in 1925, becoming Chairman o{ the Trustees in 1963. He was counsel for the formation of the Savings Bank Association in 1930; Clerk of the Board of the Mutual Savings Central Fund, lnc. 1932; President of the Savings Bank Association of Massachusetts 1935-1937, and in 1965 became associated with the law firm of Warner and Stackpole.

In the York Rite, Brother Smith was Exalted in Dorchester Royal Arch Chapter May 25, 1908, was Greeted in Boston Council Royal and Select Masters December 31, 1908, and served as its Illustrious Master in L924. He was Knighted in DeMolay Commandery #7, Knights Templar, May 26, 1913.

Brother Smith devoted much to the Scottish Rite. He received his degrees in the Valley of Boston in April oI 1924, and was Most Wise Master of Mt. Olivet Chapter of Rose Croix 1943-1946. He was created a Sovereign Grand Inspector General, 33°, Honorary Member of the Supreme Council in Boston, 1945, and Crowned an Active Member of the Supreme Council at Boston in 1948. Brother Smith served Supreme Council as Grand Keeper of the Archives 1950-1967. He twice served as Deputy for Massachusetts from June to September, 1960 and 1962. He was a member of the Committee of Jurisprudence 1948- 1950, Secretary of the Trustees 1947-1967, Committee on Constitutions and By-Laws 1951-1963, Investment Committee of the Trustees 1958-1967, Representative at the Supreme Council for Ecuador 1950-1969. He was elected an Emeritus Member on September 25, 1967.

In allied bodies Brother Smith was a Noble of Aleppo Temple, A.A.O.N.M.S. A member of Massachusetts College Societas Rosicruciana in Civitatibus Foederatis, a member of the High Council 9th Degree in 1947, and served Massachusetts as Chief Adept from 1947-t967. He was a member of Bay State Conclave Red Cross of Constantine.

Funeral services were held at the Waterman Chapel, Boston, at 2;00 p.m. on July 21, 1969, with Ill. John Gabriel Fleck, D.D. 33°, Grand Prior of the Supreme Council officiating. Interment was in Forest Hills Cemetery in Lynnfield. Many distinguished Masons were present to do him honor. Among them were: M.W. Herbert H. Jaynes, Grand Master of Masons in Massachusetts, and Past Most Wise Master of Mt. Olivet Chapter of Rose Croix; Ill. Laurence E. Eaton 33°, Deputy for Massachusetts and Grand Secretary General A.A.S.R. representing Ill. George A. Newbury, 33o, S,overeign Grand Commander of the Northern Jurisdiction. Also Past Most Wise Master of Rose Croix and other Grand Lodge, York, and Scottish Rite members, together with many friends and law and banking associates.

And thus ends the career of a trustworthy friend and Brother, known to all affectionately as "Rudy"; a Mason devoted to his duty and the Craft, a gentleman in every sense of the word; it was a privilege to have been his associate. We can truly say that he "wraps the drapery of his couch about him and lies down to peaceful dreams".