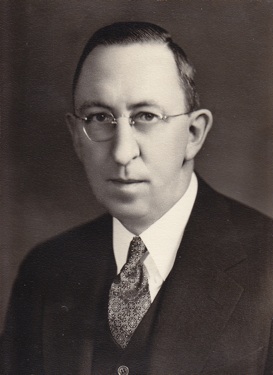 Right Worshipful Joseph Wright Keith was born on March 18, 1889 in Bridgewater, Massachusetts, the son of Sumner Keith and Sara P. (Mitchell) Keith. He was a direct descendent of Rev. James Keith who was the first minister to the Plymouth Colony, coming over from Scotland in 1660 to serve in the Church at what is now West Bridgewater. He had ancestors that came over on the Mayflower and others who fought in the American Revolution.

He attended the Bridgewater public schools, graduating from High School in 1907. He was employed at the George E. Keith Shoe Company for a few years until becoming affiliated with the law offices of Edward A. MacMaster. He soon began his law studies at Boston University Law School, graduating in 1913. He was admitted to the Bar the same year. He practiced law with the well-known firm of Nutter and King and became a partner in this firm. At the death of these two partners he became a member of the firm of Keith, Reed and Wheatley. He served as assistant to the U.S. District Attorney, Robert O. Harris, and later as Assistant District Attorney to District Attorney, Harold Williams. For many years Right Worshipful Brother Keith was moderator of the Bridgewater Town meetings, presiding with legal dignity. He was a member of the Massachusetts, Plymouth County, and Brockton Bar Associations.

He received these degrees in Fellowship Lodge.

He was a Charter Member of the Bay State Conclave, Red Cross of Constantine, and belonged to Aleppo Temple, Boston, He was married in October, 1916, to Flora S. Wheeler, making their home in Bridgewater at 32 Union Street, with a summer residence for many years in Pocasset, Massachusetts. He leaves, besides his widow, two sons, Lt. Col. Brother Herbert W. of McLean, Virginia and Brother Edward M., of Bridgewater.