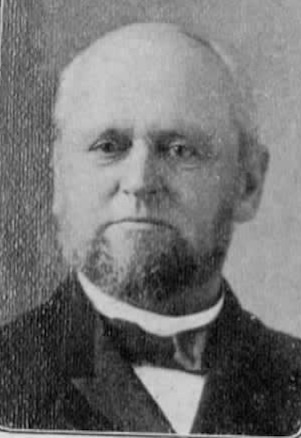 JOHN GILMAN WAITE was born in Hubbardston, Mass., eighty years ago last March. He was a descendant of one of the early families settled in that town, son of Horace and Lucy Follett Waite. He was brought up on the family farm. In his youth he enjoyed the benefit of a typical old-fashioned. New England strict moral training, which doubtless had no small part in forming his sturdy manhood, his rugged independence, and integrity of character.

He attended the local sehools and after graduating became for a few years a school teacher. His interest in the education and the progress of young people endured years after he entered into business in Boston.

In 1868, on June 24, he married. He then moved to Medford, Mass., where he resided until his death June 22, 1917, which occurred unexpectedly as the result of an apoplectic shock.

For over twenty-five years he was engaged in active business in Boston in the wholesale boot and shoe jobbing trade as head bookkeeper and credit man of a well-known corporation which weathered successfully the Boston fire of 1872, the panic of 1873, and the hard times of 1893, but a few years afterwards discontinued business. He was active in public affairs in the town of Medford for over twenty-five years, during twenty of which he served as a member of the School Committee, but he retired from that office when Medford became a city.

During his twenty years' term of service on the School Board he did much to maintain and advance the high standard of efficiency of the Public Schools and took a personal interest in promoting in any way he could the subsequent progress and welfare of the scholars; he won their respect and gratitude, as well as the confidence of the community.

He was a member of the Sinking Fund Commission of the town and later its Secretary.

He was elected in 1902 Secretary of the Veteran Association of the Lawrence Light Guard of Medford, Mass., a position he held until his death.

He was elected by the City of Medford to the Legislatures of 1897 and 1898 and served with notable efficiency, bringing credit to himself and to the city. During his service in the Massachusetts Legislature he was a member of the business committee of the House, known as the Committee on Ways and Means, to supervise and to safeguard the appropriations and. the expenditures for the maintenance of the public State institutions. On this committee his thorough business training was valuable to the State. IIe early became influential in the House as a man of common sense, of thoroughness of investigation, and of reliable, sound business judgment and unimpeachable integrity.

On business and financial measures, especially those coming from his committee, he was an informing and a convincing speaker, and he enjoyed the confidence of the House to a marked extent as a safe leader.

But he was perhaps best known as a Mason, and in Masonic circles. From early manhood, he had profound respect and admiration for the fundamental principles of the Institution of Freemasonry. He took a deep and abiding interest in them, and had a firm faith in the future welfare and progress of Freemasonry as an institution. For over a quarter of a century he devoted a very large part of his best time, thought, and energy to assisting in an official capacity to carry out its work.

He received the first three degrees in Freemasonry in Pequossette Lodge in Watertown as follows: The Entered Apprentice Degree in October, 1863, the Fellow Craft Degree on January 28, 1864, and the Master Mason Degree on March 3, 1864. He took membership July 21, 1864, which he continued until he dimitted on October 12, 1872.

He was elected to membership March 2, 1882, in Mount Hermon Lodge of Medford. He served this Lodge for years in various offices until in December, 1892, he was elected as Master. He served but one year in this office, retiring to accept his election in 1894 to the office of Grand High Priest of the Grand Royal Arch Chapter of Massachusetts, which he held for three successive terms by annual elections.

He served in 1903 as Deputy Grand Master of the Grand Lodge of Masons in Massachusetts under the late Grand Master Baalis Sanford.

He was elected to membership in Mystic Royal Arch Chapter of Medford on September 12, 1878. He was appointed a few days later by the then High Priest, the late Gen. Samuel C. Lawrence, as one of the Masters of the Veils, and he continued to serve the Chapter in its various offices until in 1884 he was elected as its High Priest. He served two terms in that office, in 1884 and in 1886. He was then appointed as District Deputy Grand High Priest of the Grand Chapter, serving in that office for three terms.

He was elected Grand Recorder of the Grand Council of Royal and Select Masters in 1898, and held this position by subsequent annual elections for nineteen years, or until his death. During a large portion of this time he also acted as Corresponding Grand Secretary.

He was elected in 1898 Grand Secretary of the Grand Royal Arch Chapter of Massachusetts, and held this position by successive annual elections for nearly nineteen years, or until his death. During most of this time he also acted as Committee on Foreign Correspondence. He took the Knight Templar Degree and membership in Boston Cornmandery, Knights Templars, June 18, 1873. He afterwards held various offices in this body successively for many years, and in October, 1899, was elected as its Commander. He served but one term in office, retiring in 1900 to accept his election as its Recorder - a position he heid for about seventeen years, or until his death. Also in 1900 he joined the Massachusetts Union of Knights Templars Commanders.

In the Scottish Rite he received the grades as follows: he became on April 24, 1871, a member of the Boston Lodge of Perfection; then a member of Giles F. Yates Council of Princes of Jerusalem on October 6, 1871; a member of Mount Olivet Chapter of Rose Croix on October 20, 1871; and a member of Massachusetts Consistory on November 3, 1871. He never actively identified himself with the work of the Scottish Rite bodies, but he retained his membership in Boston-Lafayette Lodge of Perfection and in Massachusetts Consistory until his death.

He was presented by the M.W. Grand Master of Masons in Massachusetts, in Mount Hermon Lodge, with a Henry Price Medal in June, 1917, in token of appreciation of his faithful and honorable services in Freemasonry for over fifty years.

His widow survives him, and. the sympathy of the Fraternity goes out to the wife who walked with him so encouragingly and sympathetically for forty-nine years in his pilgrimage through life, and for whom the world has never since seemed the same.

The funeral services were held in Medford June 26, 1917, at 3 p.m., in the First Parish Church, the Unitarian Church which he had attended. for over forty-five years. The Rev. Brother Louis C. Dethlefs officiated, and there was a large attendance from all walks in life. The Committal Service at the grave was rendered,in Oak Grove Cemetery, Medford, by the officers and members of Boston Commandery, under Eminent Sir George U. Bauer, in cooperation with the officers of Mount Hermon Lodge.

R.W. Brother Waite was so thoroughly inculcated in early life with sound, moral principles that he was conscientious almost to a fault. He was a thoroughly dependable man. His natural impulses were kindly, genial, generous, and hearty. In fact, a large part of his life was devoted to helping and to serving others. His early training taught him the true "sweat value of a dollar," but he never came to overvalue it in comparison with higher things, such as promoting the welfare of his fellow men. He was always a public-spirited citizen, whether in office or out, industrious in business, possessed of great common sense, sound judgment, and integrity. These qualities made him efficient in public affairs and won for him the abiding confidence, respect, esteem, and friendship of his fellow men, especially in the community in which he lived continuously for nearly fifty years. His character was shown in his life. His memory remains in our hearts. Semper Fidelis. Requiescat in pace. May the Fraternity never lack the services of good men and true such as was R.W. Brother J. Gilman Waite.