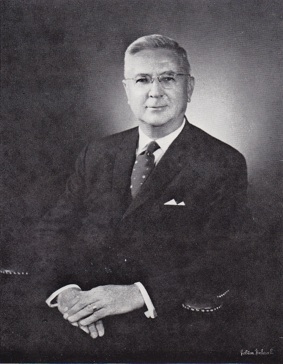 A delicious dinner was served in the Wamsutta Club, which was attended by M. W. David B. Richardson, Grand Master, and many distinguished Masons of the jurisdiction. The Grand Master was accompanied on the suite by five Past Grand Masters and many of the Grand Lodge line officers. Highlighting the evening was the presentation of a 50-year Past Master's certificate by the Grand Master to the distinguished honoree. 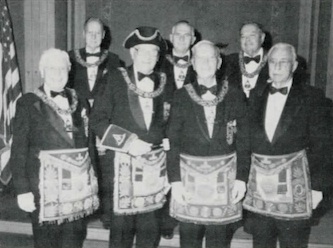 Many repaired to the dining hall at the conclusion to wish him well and to exchange pleasantries with him and his lady Catherine.

He was my father's boss at Revere Copper and Brass. Not only did he sponsor my dad in Eureka Lodge but he raised him as well as installed him Master.

Most Worshipful Thomas Arnold Booth was born in New Bedford, on August 14, 1902, the son of John and Nancy (Parkinson) Booth.

Most Worshipful Brother Booth was a 1920 graduate of New Bedford High School and attended night courses at the New Bedford Vocational School as well as Herricks Institute and Swains School of Design. He also took extension courses at Brown University and the University of Massachusetts. He was employed as a production manager for Revere Copper and Brass Inc., and had served that organization for 47 1/2 years prior to his retirement.

He was a member, and former Deacon, of the First Congregational Church of Fairhaven, Massachusetts.

Most Worshipful Brother Booth also held membership in many other affiliated Bodies, including the Red Cross of Constantine; Knight York Cross of Honor; Royal Order of Scotland; Societas Rosicruciana; Holy Royal Arch Knight Templar Priests; The Grand Council of Allied Masonic Degrees; Knight Masons, Grand College of Rites; Gifford Chapter No. 105, Order of the Eastern Star, serving as Worthy Patron in 1935; White Shrine of Jerusalem and Palestine Shrine No. 9 of New Bedford as well as Aleppo Temple A.A.O.N.M.S. He also served for many years as a member of the Grand Lodge Board of Relief and more recently as a member of the Board of Managers of our Masonic Home. He was an Honorary Member of the Legion of Honor of the Order of DeMolay. 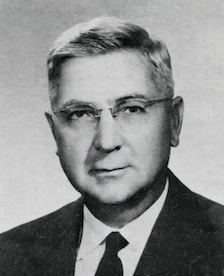 M. W. Thomas Arnold Booth, 83, Grand Master of Masons in Massachusetts, 1966-68, a member of the Board of Directors, Board of Managers of the Masonic Home, and a retired production manager for Revere Copper and Brass, Inc., New Bedford, died March 24 of pneumonia. He had resided at the East Village Nursing Home, Lexington, for a year. Son of the late John and Nancy H. (Parkinson) Booth, he was the widower of Katherine C. (Fleming) Booth.

A native of New Bedford and graduate of New Bedford High School in 1920, he began employment with Revere and continued his education at New Bedford Textile and Vocational Schools, Herrick Institute, and Swain School of Design, and took extension courses at Brown and Massachusetts Universities. He had been a member of the New Bedford Harbor Commission, New Bedford Port Society, and Old Dartmouth Historical Society.

Raised in Eureka Lodge in 1924, Bro. Booth was its Worshipful Master ten years later and had been an active York and Scottish Rite Mason. A Thirty-third Degree Mason, he was Grand Representative of England at the Grand Lodge of MA, held honorary membership in seven Lodges, and was Deputy Grand Master in 1961. He served as Grand Commander of the Grand Commanderv of Knights Templar and Appendant Orders of MA and RI, 1956-57.

Bro. Booth also held membership in the Royal Order of Scotland, The Philalethes Society, Grand College of Rites of the U.S., The Massachusetts and Roger Williams Priories of the DeMolay Legion of Honor (Honorary). He was a Past Patron of Gifford Chapter, Order of the Eastern Star, and was an active member of the Republican Party for many years. An Honorary member of the Grand Lodge of Chile, he had been a deacon of the First Congregational Church of Fairhaven.

I don't suppose you have been wondering what I have been thinking about while 1 was sitting down and eating this delicious dinner, but I will let you in on it. I was thinking how would it ever be possible for a little fellow from the Whaling City of New Bedford to get to Boston to receive this high honor I have received today. I want to tell you sincerely and from the bottom of my heart that 1 appreciate it very much and I will say that in all my years in Masonry 1 have always heard and have preached it a little bit too that the Grand Master can do no wrong. Now he has given me one year to prove it. (Laughter)

During the course of the afternoon while I was out in the corridors talking with a few of the boys I mentioned something about my predecessors and wondered whether 1 would ever be able to match their performances and somebody made the remark "You ought not to ever look back but forward." That is something like that new frontier we have heard so much about. (Laughter) But I have been interested somewhat in Colonial Masonry. I never got a chance to study it very much because I have been busy on other things, but I am quite interested in it, particularly Paul Revere, because my company happens to bear his name, but when I think of Henry Price and Joe Warren and Paul Revere and George Washington — and we all revere those names I am sure because they were great Masons — but then I think what made them great Masons. They were great Masons because they believed in the philosophy of Masonry and practiced it in their everyday life. And they were good men and great patriots, not necessarily because they were Masons, but they were Masons because they were just what they were. So I do look back on those colonial days and perhaps some more recent, and I feel that we can and perhaps should, look back to the old days for the inspiration to carry on and try to even do better if possible. I don't see how it would be possible, in my case, but at least we can try. That is my intention this year, to do the best I possibly can.

I want to thank the Grand Master for the confidence he has seen fit to place in me and to assure him that in every possible way 1 will do my best to carry on the work he has given me. Thank you. (Applause)

Greetings from the Grand Lodge of Massachusetts.

It is a great pleasure and privilege to be with you tonight and participate in the celebration of your Fiftieth Anniversary. When we look back fifty years we might wonder whence came the vision, the foresight, the courage, the determination of the founders of this lodge. There can be no doubt that they were imbued with the spirit of brotherly love, a desire for fraternal communion, a desire to share their Masonry with one another.

For fifty years Darien Lodge has been a haven of fraternal fellowship and brotherly love in this community. It is the dream of the past come true, the crown and climax of the faithful aspiring and consecrated labors of the members of this Lodge in years gone by.

The heritage which they have given us convinces our hearts that there have been more hands engaged in the work of Darien Lodge than the mortal eye can see. The mortar of brotherly love and affection which made them a society of friends and brothers likewise formed the link by which we are in duty bound to them. We are indebted to those who are gone as we are to those who will follow us, to make ourselves men whose lives are built upon the foundation of Brotherly Love, Relief and Truth.

Our challenge then is to make our Masonry great. Let it fill our hearts and minds. Let it overflow in our daily contacts at work and play that the world may know that it is the humble practice of its precepts and virtues that give us the comfort of permanence in the midst of change and transition.

Brethren, it is a great challenge. Let the Masonry in Darien Lodge be the symbol of the Temple of Life we build by our thoughts, words and actions every day. May we have the faith of our fathers that Masonry existing through the members of Darien Lodge will live on to an even greater future.

AT THE 200TH ANNIVERSARY OF THE GRAND LODGE OF ENGLAND, JUNE 1967

Most Worshipful Pro Grand Master and Brethren, it is my privilege to bring to you all the warm fraternal greetings of the Most Worshipful Grand Lodge of Masons of the Commonwealth of Massachusetts on this wonderful occasion of your 250th anniversary. Two hundred and fifty years is a long time, and when we reflect and realize that here was the beginning of organized Freemasonry in the world, when we reflect upon what this has meant to men of goodwill and to the world all over, I think we can take personal pride in the fact that we are the heirs of those great men, those fore-sighted and far-sighted men, those men whose faith and courage and whose love for their Brethren in Masonry prompted them to join together in a fraternal union that has spread the seeds of brotherly love, relief and truth over the entire world.

True, there have been differences of opinion, which are always present when progress is to be made. True, in Massachusetts there were those who differed in opinion with His Majesty George III. But liberty and freedom of speech and a desire for self-government have always been moulded into the hearts and minds of Englishmen, and these were but Englishmen on far distant shores. Their love of Masonry, their desire for fraternal communion, however, held fast to their Mother Grand Lodge until such time as it seemed fitting to assume the responsibility of guiding their own Masonic destiny in the New World, at the same time holding fast to the ancient Landmarks and Masonic principles as laid down by the Mother Grand Lodge in 1723.

Those of us who have come to England from Massachusetts to represent our Grand Lodge at this Communication are greatly honoured by your invitation.

I think I speak for all visiting Brethren from the other side of the Atlantic when I say that we will never forget these days we are spending with you and your Brethren. The princely hospitality which you have showered upon us and our ladies will always be fresh in our minds, and the memory of those many kindnesses and warm friendly greetings with which you have surrounded us will remain with us as long as we live.

We extend to you our heartiest congratulations and our best wishes for continued success in the future. We thank you for your brilliant leadership and, as the oldest daughter Grand Lodge, we assure you that our hearts will always be with our Mother Grand Lodge, the United Grand Lodge of England. (Applause)