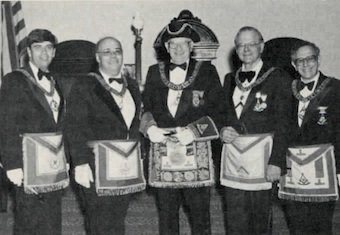 First was the Testimonial honoring Illustrious Potentate Ralph S. Cohen of Aleppo Temple culminating with the pre- sentation of a check to be donated to the Shriners Burns Institute of Boston. Three speakers extolled the virtues of R. W. Bro. Cohen whose meteoric climb to the top rank in Aleppo placed him in charge of some 13,000 Shrine Masons for the year. The speakers in the persons of R. W. James C. Sirios, M. W. Donald W Vose, and M. W. David B. Richardson, Grand Master, were a highlight of a well-attended evening.