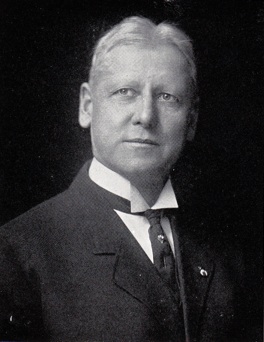 He was in the real estate and insurance business until failing health caused his retirement. His later years were spent in New Hampshire.

He served as Grand Marshal for Most Worshipful Melvin M. Johnson, and was Senior Grand Warden in 1917.

He was a member and Past High Priest of St. Paul's Royal Arch Chapter, and a member of DeMolay Commandery, Knights Templar.

Right Worshipful Brother Farrington is remembered for the grace and dignity with which he discharged the duties of Grand Marshal and for his genial courtesy in all his Masonic relations. Although not seen among us for several years, he was not forgotten and the news of his death brought sorrow to his many friends and former associates.

R.W, Brother Farrington was born in Brighton, Massachusetts, June 12, 1866, and died in the hospital at Wolfeboro, New Hampshire, October 4, 1937. He had resided in Melvin Village, New Hampshire, the past few years, but most of his life was spent in that part of Boston known as Allston where he attended the public schools and later was engaged in the real estate business. He is survived by his wife, Mrs. Mabel E. (Fay) Farrington. A daughter was born to them who deceased during childhood.

R.W. Brother Farrington's service to Freemasonry was far greater than is indicated by the list of offices which he held. Quiet and unassuming, he consistently practiced in daily life the high principles taught in the Lodge; thus he merited and won the affection and esteem of all who knew him.

The passing of R.W. Bro. Farrington leaves a vacant place in our hearts. Funeral services were held at Mt. Auburn Chapel, Cambridge.

"Immortal bliss, which thou hast won
By striving for the right;
Through deeds of kindness thou hast done
So pleasing in my sight;
Immortal bliss, I give to thee
Because, throughout life's span,
Thou hast seen fit to honor Me
By serving fellow Man."