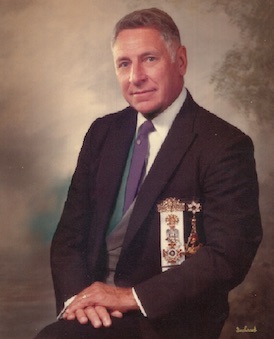 Ill. Stafford Edmond Davis, 33° was the son of Clifford and Mabel (Chapman) Davis. He graduated from Springfield Technical High School and was employed as a Consulting Engineer and Chief Inspector at the U. S. Armory in Springfield. He served in the United States Air Force, retiring as Major.

Ill. Brother Davis was raised a Master Mason in Dalhousie Lodge, A.F.&A.M., Newtonville, in 1950 and served as Master in 1962. He served the Grand Lodge as Instructor of the 34th Lodge of Instruction in 1967; Grand Marshal in 1969-71; and Senior Grand Warden in 1972. He was the recipient of the Henry Price Medal in 1970. He was exalted in Newton Chapter R. A. M. and greeted in Boston Council R. & S. M., both in 1970. He completed the degrees of the Scottish Rite in the Valley of Boston on October 24, 1952, and served as Most Wise Master of Mt. Olivet Chapter of Rose Croix. On September 24, 1980, he was created a Sovereign Grand Inspector General, 33° Honorary Member of the Supreme Council at Cleveland, Ohio.

May our Heavenly Father have him in His Holy Keeping.

He was born on Dec. 22, 1918, in Springfield, Mass. He was a graduate of Northeastern University. He was a retired captain of the Air Force, serving during World War II, in North Africa, and Italy.

Mr. Davis resided in Newtonville for many years before retiring to Chatham in 1981. He retired as vice president of the E. C. Hilliard Corporation. He was a consulting engineer for Ark Les Switch Company and had seven US Patents. He was also the bank director for Newton Cooperative Bank for many years.

Besides his loving wife, Mildred Betty” Davis, he leaves two nieces, Debra Boynton of Rochester, N.H., and Holly Hess of Westfield; one greatniece; and three greatnephews.