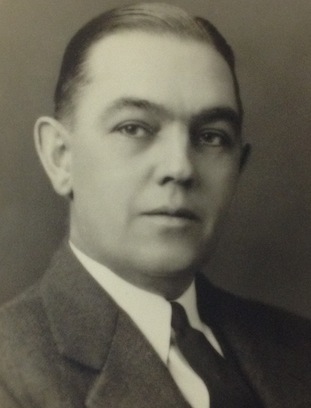 Right Worshipful James Ferguson Watson was born in Great Barrington, Massachusetts, October 26, 1901, the son of James F. and Robina (Morrison) Watson. He was educated in the public schools of Great Barrington and later in the Berkshire Business College at Pittsfield. At the age of fourteen, he went to work for the B. D. Rising Paper Company, where he remained for five years. Following this, he became cost accountant for the Monument Mills of Housatonic, a position he held for the next nine years. In 1929 he became associated with the Western Massachusetts Finance Company (now the Pioneer Credit Association) as Assistant Treasurer, later becoming its Treasurer and General Manager. This position he held until the day of his death. He was also a Director of the Guardian Credit Corporation of Hartford, Connecticut; Vice-President of the Massachusetts Association of Small Loan Companies and past President of the New England Association of Sales Finance Companies. He was an active member of the American Finance Conference, serving for several years on its Board of Directors, and as Vice-president in 1951 and 1952. In the fall of 1953, he was elected president of that national organization.

Right Worshipful Brother Watson had a keen interest in his Church and the civic affairs of his town. He was a life-long member of the Housatonic Congregational Church and had served it faithfully. During the years he had held practically every office of that body from teacher of the Sunday School to Trustee. In the Town of Great Barrington, he was a civic leader, always interested in the problems of its youth and its schools. He was a member of the school committee for ten years. He also acted for several years as an officer of the Wyantenuck Country Club and the Great Barrington Chamber of Commerce.

Right Worshipful Brother Watson was an ardent Rotarian, serving the Great Barrington Club as President in 1944, and as District Governor of the 199th (now the 291st) District of Rotary International in 1945.

Brother Watson's service to the Masonic Fraternity was long and distinguished. He was received in Cincinnatus Lodge in Great Barrington on December 15, 1922; passed on January 19, 1923, and raised on February 16,1923. He served in the various offices of the Lodge and was elected Worshipful Master in October, 1930, the youngest Master ever. to serve his Lodge. (District Deputy Grand Master, Pittsfield 16th District, 1937-1938.)

He received the Royal Arch Degree on May 9, 1938, in Monument Chapter, Great Barrington, and the Order of the Temple on February 13, 1939, in Berkshire Commandery, Pittsfield. In the Ancient Accepted Scottish Rite, he served in various offices and held membership in the following bodies: Onata Lodge of Perfection; Pontoosuc Council, Princes of Jerusalem; and Pittsfield Chapter of Rose Croix, all of Pittsfield, and the Connecticut Valey Consistory of Springfield. He was appointed District Deputy Grand Master of the Pittsfield Sixteenth Masonic District in 1937 and the following year received the appointment as Representative of the Grand Lodge of Colorado.

ln 1945 he was elected Junior Grand Warden, the first member of Cincinnatus Lodge to be elected to the Grand Lodge in the first 150 years of its history. He received the Henry Price Medal in 1945. His interest in the Lodge of Instruction and in the educational work of the Grand Lodge was keen and active. He was appointed a member of the Education Committee in 1942 and held that appointment until his death. It goes without saying that much of the success of the educational effort in the Twentieth Lodge of Instruction was due directly to his untiring efforts. Only two days before his death, he had driven to the Masonic Home to meet with the Most Worshipful Grand Master and the members of the Education Committee, returning late at night, weary but nevertheless inspired with plans for the coming year. Thus did Brother Watson give of himself to all that he loved and cherished - his family, his Church, his community, and most of all, his Masonry.

Jim, or "Jimmy" as he was affectionately known to a host of friends, was of a kindly nature and with a ready smile and the enviable knack of making friends wherever he went. He was loyal and sincere in his business dealings, but was impatient with pretense and incompetence. He was one of the best-known Masons in his Districr and the great loss in his passing will be felt most keenly by those who try to fill the vacancies he has left.

Right Worshipful Erother Watson passed away suddenly on January 25, 1954. He is survived by his widow, Frances Kinne Watson, and by two children, Jane Frances and James F. Watson, Jr.

Funeral services were held at the Housatonic Congregational Church January 28, with its Pastor, Worshipful Frank Cutter, officiating. The Grand Lodge was represented by Most Worshipful Whitfield W. Johnson, Grand Master, and by many present and past Grand Lodge officers. The Masonic funeral service was conducted by Cincinnatus Lodge, followed by the Masonic Committal in the Housatonic Cemetery.