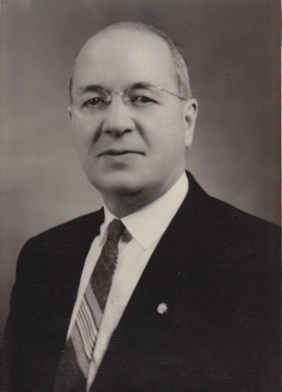 George attended the Lowell public schools and, after graduating from Worcester Acaderny, attended Worcester Polytechnic Institute. He established the George Upton Insurance Agency over 45 years ago, having retired in December of 1958.

On September 3, 1918 he married Hazel Anna Coy, who survives him together with a sister, Mrs. Ruth Upton Langevin, and several nieces.

He was exalted in Mount Horeb Royal Arch Chapter of Lowell January 16, l9l7; greeted in Ahasuerus Council May 8, 1925; and on February 23, 1926 was knighted in Pilgrim Commandery No. 9, of which he was Eminent Commander in 1939.

He received the Scottish Rite degrees in Lowell Lodge of Perfection, Lowell Council, Princes of Jerusalem, Mt. Calvary Chapter of Rose Croix, and Massachusetts Consistory, serving as Most Wise Master of Rose Croix in 1948-49-50. He was created Sovereign Grand Inspector General 33°, Honorary Member of the Supreme Council, on September 28, 1949 at Chicago. He was a member of Aleppo Temple, Massachusetts College Society of Rosecrucians, and Bay State Conclave of the Red Cross of Constantine.

A Memorial Service was held by William North Lodge at 4:00 P.M. on Wednesday, March 10,1965 at the Morse Funeral Home. Funeral services were conducted at the First Congregational Church by Reverend W. Irving Monroe, Jr., March ll, 1965. Interment was in the Lowell Cemetery. The services were attended by a host of friends and dignitaries. Grand Lodge was represented by our Grand Master, Most Worshipful A. Neill Osgood. The American Flag was presented to Mrs. Hazel Upton in appreciation of the Patriotic, Loyal and Devoted Service which George had rendered to his Country during its hour of need.