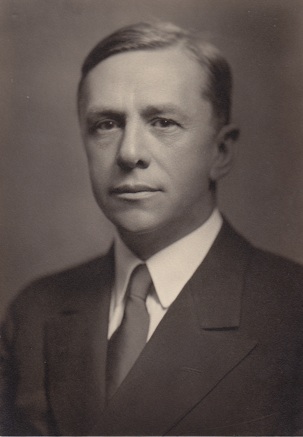 Right worshipful Thomas Frederick Brunton was born in Boston, Massachusetts, on June 24, 1886, the son of George E. and Mary J. Bailey Brunton, who were themselves born in England and came to the United States in 1884 and 1885.

He was educated in the Boston public schools and East Boston High, where he also took Post Graduate work in 1904. His life work was with the John Hancock Mutual Life Insurance Company in Boston. In June 1951 he retired after completing a successful 47 year career. He held various, management positions where he rose to Assistant Actuary in 1923, Assoclate Actuary in 1944, and was elected Second. Vice President in 1946. In 1949 he was elected Vice President which office he herd until his retirement.

He was active in community affairs and served as Vestryman in the Episcopal Church of the Good Shepherd in Dedham, Massachusetts, from 1929 to 1934. He was also a Town Meeting representative in Dedham from 1930 through 1934.

Right Worshipful Brother Brunton received the Henry Price Medal in 1935 and his Veteran's Medal in 1958. From 1929 until 1967 he was the Representative of the Grand Lodge of Tasmania.

In York Rite Masonry he received the Royal Arch Degree in St. Andrew's Chapter in Boston, June 1, 1910; the Super Excellent Degree in Boston Council on September 29, 1910; and the Order of The Temple on April 19, 1911 in Boston Commandery.

He belonged to the Scottish Rite Bodies and was Most Wise Master of Mount Olivet Chapter of Rose Croix in 1932, 1933 and 1934 and received the Supreme Council Honorary Thirty-third degree in September 1935.

Right Worshipful Brother Brunton lived in Boston and Dedham, but in his later years he lived in Wolfeboro, New Hampshire. While residing in Wolfeboro he was active in Church and Town affairs. He was a Warden in All Saints Episcopal Church, Director of the Wolfeboro National Bank, Chairman of the Budget Committee and Town Auditor. He died on January 10, 1969. Funeral services were held at the Forsyth Chapel, Forest Hills Cemetery, Jamaica Plain, Massachusetts, on January 14, 1969 and a Memorial Service was held in All Saints Episcopal Church in Wolfeboro .on January 15, 1969.