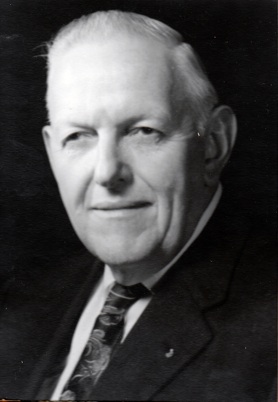 Right Worshipful Eliot Franklin Borden was born in New Bedford, Massachusetts, on August 3, 1907, and was the son of Albert E. and Louise (Sisson) Borden. He was a lifelong New Bedford resident, was educated in New Bedford public schools, and graduated from New Bedford High School in 1925. He graduated in 1928 from New Bedford Textile School (now a part of Southeastern Massachusetts University). After working several years as a textile chemist, he began his employment at Revere Copper and Brass on March 20, 1939, as a chemist and retired on June 1, 1971.

In his community Right Worshipful Borden was an active member of Trinity United Methodist Church, serving as Finance Chairman and Chairman of the Board of Trustees; a member of the New Bedford Port Society, serving on the Board of Managers and Chairman of the Religious Planning Committee; and a Director of Seaman's Bethel. He was Secretary and Treasurer of Delta Kappa Phi Fraternity and a Past President of New Bedford Textile School Alumni Association.

Right Worshipful Borden was raised in Star in the East Lodge, New Bedford, on October 21, 1935, serving as Worshipful Master in 1943-1944, was Chaplain from 1945-1972, served as Secretary from 1972-1990, and served as Master of the 26th Lodge of Instruction 1952-1953. He was appointed District Deputy Grand Master for the New Bedford 30th District in 1959-1960. In 1973 he was elected Junior Grand Warden of the Grand Lodge of Massachusetts and was appointed Grand Representative to Manitoba. He was a recipient of the Henry Price Medal and was presented a Veteran's Medal in 1985, signifying 50 years of membership in the Fraternity. Right Worshipful Borden was a Zone 3A Committeeman for many years on the Standing Committee of Masonic Service and served a number of years as President of the New Bedford Masonic Temple Association, Inc.

In York Rite Masonry, Right Worshipful Borden was exalted in Adoniram Chapter, Royal Arch Masonry in 1946, and served as Excellent High Priest in 1952-1953 and 1967-1968. He was greeted in New Bedford Council Royal and Select Masters in 1947 and served as Illustrious Master in 1956-1957. He was knighted in Sutton Commandery #16 in 1947, served as Commander in 1952-1953 and Treasurer in 1959. After receiving the York Cross of Honor, he served as Prior of Roger Williams Priory #48 in 1977. At his death he was Presiding Preceptor of Damascus Tabernacle #26, Holy Royal Arch Knight Templar Priests. Active in Scottish Rite Masonry, he was a member of Fall River Lodge of Perfection, Samuel C. Lawrence Council Princes of Jerusalem, St. Andrew Chapter of Rose Croix, and Old Colony Consistory. He was a Past Thrice Potent Master of Fall River Lodge of Perfection.

Right Worshipful Brother Borden was called to "that house not made with hands" on June 20, 1990. A Masonic Funeral Service was conducted by Worshipful Kenneth W. Winslow, Jr., and the officers of Star in the East Lodge on Thursday evening June 21, 1990, at the Potter's Funeral Service, Westport, Massachusetts. The Funeral was held on Friday, June 22, 1990, at 10 a.m. at the Potter's Funeral Service with R.W. and Reverend Oscar A. Guinn, Jr., assisting the minister of Right Worshipful Borden's church. Burial was at the family plot in Rural Cemetery New Bedford. Survivors include a niece, Marilyn Heath, of North Carolina.

Right Worshipful Brother Borden was a Mason who accepted many jobs and positions in Masonry and dedicated himself to fulfill them to the best of his ability.

R. W. Eliot Borden, member and Secretary of Star in the East Lodge, New Bedford, died June 20 in his 83rd year of life and 55th year as a Master Mason. The Junior Grand Warden in 1973, he was a retired chemist for Revere Copper and Brass where he had worked for 32 years. He was a 1928 graduate of the New Bedford Textile College, now a part of the Southeastern Massachusetts University of Dartmouth.

Raised in 1935, he was Master of his Lodge 1943-44, and served as Secretary from 1972 until his death. He was Master of the 26th Lodge of Instruction 1952-53. and D. D. G. M. of the New Bedford 30th 1959-60. The Grand Representative to Manitoba, he was the Zone 3A Committeeman for the Grand Lodge Service Committee, and was active in both the York and Scottish Rite Bodies. As Past President of Delta Kappa Phi Fraternity, he was the Treasurer-Secretary at the time of his death; member of the New Bedford Port Society. Director of the Seamen's Bethel, and active member in the Trinity United Methodist Church of New Bedford.

A Masonic service was conducted by Wor. Kenneth W. Winslow. Jr. and officers of Star in the East Lodge. Grand Chaplain Oscar A. Guinn. Jr. assisted in the funeral service. Bro. Borden is survived by a niece. Marilyn Heath, of North Carolina.