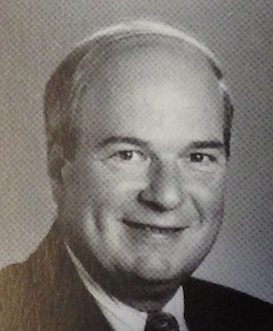 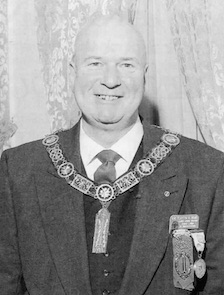 Right Worshipful Donald W. Gillis. Jr.. probably knows every crack in the Route 128 roadbed after making tracks to Peabody and Essex County from his Brockton home for several years, but now that he has been elected and installed Junior Grand Warden he will learn about many other roadbeds.

Brother Don and his wife. Sandra, are both natives of Peabody where he was raised in Jordan Lodge in 1969. He served as Worshipful Master in 1978 and in 1996 was elected Secretary, another reason for driving to and from Peabody and Brockton. He is the Director of Communications for the Essex County Sheriff's Department in Middleton.

A charter member of The DeMolay Lodge. Boston, he served as Worshipful Master in 1989. He is also an affiliate of Golden Fleece Lodge in Lynn and Winslow Lewis Lodge, Boston. He served the Grand Lodge as Junior Grand Deacon in 1986 and was District Deputy Grand Master of the Lynn 8th Masonic District in 1988 and 1989. He received the Joseph Warren Medal for Distinguished Service in 1999.

The Order of DeMolay has always played an important role in his life. He was Master Councilor of Peabody Chapter in 1967 and Massachusetts State Marshal a year later. He received the Degree of Chevalier in 1968 and is Past Commander of the Hunter Court. The Active Legion of Honor was bestowed upon him in 1978 and he is a Past President of the Massachusetts Court and an Honorary Member of the International Supreme Council. Sons Scott, aged 16, and Craig, aged 13. are members of the South Shore DeMolay Chapter in East Weymouth.

Boy Scouting has played a major role in his life since his youth and he is now a Scoutmaster for a Brockton troop. The Gillis family worships at Trinity Episcopal Church in Randolph. He attended Salem State and North Shore Community Colleges. After 29 days in the United States Air Force he was issued an honorable medical discharge in 1970.

R. W. Bro. Gillis is a member of St. Andrew's Royal Arch Chapter of Boston and Sutton Chapter in Lynn and was Eminent Commander in 1986 of St. Bernard Commandery. Boston. He is the present Master of Ceremonies.

From 1992 through 1995 Bro. Gillis was Sovereign Prince of Giles F. Yates Council. Valley of Boston. Scottish Rite. He was created a Sovereign Grand Inspector General (Thirty-third Degree) in Milwaukee in 1996. He is a member of Aleppo Temple and Director of Protocol. Ceremonial Potentate and Treasurer's Assistant. 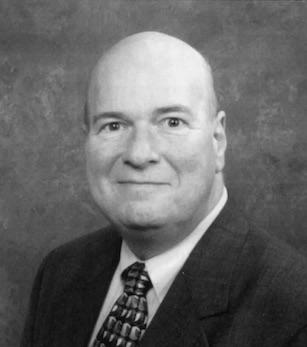 Right Worshipful Brother Gillis was born in Lynn on September 5, 1947, son of Donald W., Sr. and Geraldine Miller Gillis. He was educated in the Lynn and Peabody Public Schools and attended North Shore Community and Salem State Colleges. He became head of the household consisting of his mother, four brothers, and two sisters at sixteen when his father passed away.

Brother Gillis was married to Sandra Helen Klint on August 3, 1973. This marriage was blessed with two sons, Scott Andrew and Craig Bruce. He was a Deputy Sheriff in the Essex County Sheriffs Department and had previously been affiliated with the transportation management business. He was particularly active in the Episcopal Church in Peabody and most recently in Trinity Episcopal Church of Randolph where he was a licensed Lay Reader and Acolyte Director.

His service to the Order of DeMolay over many years was exemplary. Brother Gillis was a Past Master Councilor of Peabody Chapter, a Past State Marshal, received the prestigious Chevalier Award, and was a Past Commander of Hunter Court, and Active Legionnaire of the Legion of Honor and Past President of Massachusetts Court and an Honorary Member of the International Supreme Council.

Brother Gillis was raised in Jordan Lodge, Peabody, in 1969 and served as Worshipful Master in 1978. He was Secretary of the Lodge from 1996 and was appointed District Deputy Grand Master of the Lynn 8th Masonic District in 1987, serving in that office in 1988 and 1989. He was a Charter Member of The DeMolay Lodge and served as Worshipful Master in 1989. He was a member, also, of Golden Fleece and Winslow Lewis Lodges. He served as Junior Grand Deacon of our Grand Lodge in 1986. He was elected Junior Grand Warden on December 8, 1999, and served in that office until his death which followed a long and courageous battle with cancer. He received the Joseph Warren Medal for Distinguished Service in 1999 and the Henry Price Medal this year.

He was a member of the York Rite of Holton, St. Andrews, and Sutton Royal Arch Chapters; Salem Council, Royal and Select Masters, and St. Bernard Commandery No. 12, Knights Templar in which he served as Eminent Commander in 1986 and as Master of Ceremonies. He was a member of the Scottish Rite in the Valley of Boston and served as Sovereign Prince of Giles Fonda Yates Council, Princes of Jerusalem 1992-1995. He was a Degree Worker in all four Bodies. He was created a Sovereign Grand Inspector General 33°, Honorary Member of the Supreme Council in 1995 in Milwaukee, Wisconsin.

Brother Gillis was a member of Aleppo Temple, Ancient Arabic Order, Nobles of the Mystic Shrine and its Ritualistic Degree Team. He was a Past Patron of the Order of the Eastern Star and was the recipient of the Grand Cross of Color, International Order of Rainbow for Girls.

He served in the United States Air Force and was discharged in 1970. He is survived by his wife, two sons, his mother, three brothers and a sister. A Masonic Funeral Service was conducted by Jordan Lodge and burial was from St. Paul's Episcopal Church in Peabody with interment at Puritan Lawn Memorial Park Cemetery in Peabody. His passing will leave a void in DeMolay, Grand Lodge, York Rite, Scottish Rite and the Shrine that can never be completely filled.

May our Heavenly Father have our Brother in His Holy Keeping.