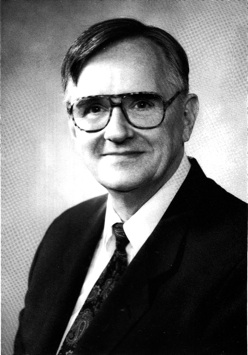 Our Senior Grand Warden Arthur E. Johnson and his wife. Barbara, are among those lucky people who call themselves proud and happy grandparents. And, like most grandparents, they have a different perspective of their four grandchildren than of Dawn, their one daughter they raised. And they're enjoying every minute of life with Craig. Caitlin. Scott and Lauren Megquier. whose father is Stephen and husband to Dawn. "They get most of my attention, and I am amazed at their knowledge, their logic and their ability to train me to do whatever they want." says this happy grandfather.

Natives of Boston, Arthur and Barbara moved to Hingham 25 years ago when Dawn was a youngster. Dawn is a Past Worthy Advisor of Hingham Rainbow Assembly No. 76 and now meets many of her father's Masonic friends as she finds time to help serve dinners at South Shore Lodges. Hopefully. Rainbow and DeMolay can look forward to new members.

Brother Johnson holds B. S. and B. A. degrees from Boston University and attended the PMD program at Harvard Business School. He was director of Data Processing with the Shawmut Bank for 23 years, and because of the recent announced merger of Shawmut and Fleet Banks, he probably is happy he chose to form his own real estate investment business.

Like Deputy Grand Master Bob Hartley, the Johnsons are Methodists and active with the Quincy Community United Methodist Church. This year Arthur is chairman of the Pastor-Parish Relations Committee. He reflects back to his Boy Scouting experiences when living in Boston, as does our Grand Master, David W. Lovering. Since 1965. when he was Raised in Macedonian Lodge, Masonry has influenced his life. And that's been good for both.

Without placing any emphasis on a particular theme other than pledging to add to the common stock of knowledge of the Craft to improve himself and Freemasonry, Arthur Eugene Johnson of Hingham was elected and installed the 73rd Grand Master of Masons in Massachusetts. Installed by retiring Grand Master David W. Lovering to head the third ranking Masonic jurisdiction in the world, the ceremony in due and ancient form was held on December 27 and followed by the traditional Feast of Saint John the Evangelist.

A native of Boston but resident of Hingham for 25 years. Brother Johnson and his wife. Barbara, raised their daughter. Dawn, who has given her parents four children who might now lose some of the tender loving care that grandfathers have to offer. His travels will mean that a ready-packed suitcase will always be at the door.

Our new Grand Master is the first presiding Senior Grand Warden to immediately advance to the East since Most Worshipful John Heard of Boston was elected unexpectedly to fill the third year of Most Worshipful Winslow Lewis in 1856. He resigned because of feeble health and professional commitments. He returned in 1860 to complete his third year of office. Prior to that Brother Benjamin Russell had been elected Grand Master in 1814 from his office as Senior Grand Warden. Our Grand Lodge does not practice the progressive line for advancement.

During the procession that salutes the new Grand Master, Deputy Grand Master Robert H. Hartley carried the urn containing the lock of hair of our Illustrious Brother George Washington, given by his wife Martha. The urn was made by Brother PPaul Revere and the Grand Master is committed to care for the historical urn and lock of hair during his administration.

E. Joel Peterson, Grand Marshal for three years. I the uncontested election as Senior Grand Warden. When installing R. W. Bro. Peterson the Grand Master said, "It is not just for good and faithful service that I install you as Senior Grand Warden, but proof of your popularity among the Craft and your commitment to Masonry." He is a resident and business man at Woods Hole on Cape Cod.