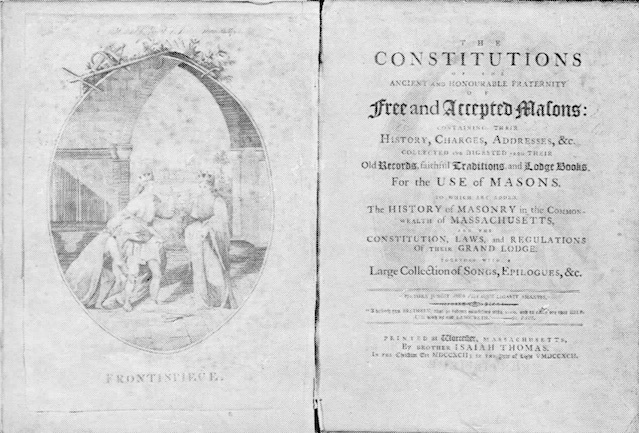 The Grand Tyler shall attend every call of the Grand Master and be present at every Grand Lodge; for which services he shall be rewarded from time to time according to his merit.

All the Lodges, under this Jurisdiction, shall be formed into Districts to be denominated from the number of their order, in such manner that no Lodge shall be distant more than forty miles from any other Lodge within the same District, excepting in that part of the Jurisdiction which is within the District of Maine.

And such District Deputy Grand Master shall keep an account of his expenses in visiting his several Lodges and making returns as aforesaid, for which he shall b© reimbursed from the Treasury of the Grand Lodge by order of the Grand Master.

From and after the first day of January next, the price for making, Crafting and Raising Masons throughout this Jurisdiction shall not be less than eighteen dollars, including the payment hereafter to be made to the Grand Lodge — fifteen dollars of which shall be paid at Initiation, and not less than three at Crafting and Raising. And out of the sum of fifteen dollars paid at initiation, two dollars shall be paid for the use of the Grand Lodge. And the Master of every Lodge in each District shall cause a return to be made of all the Masons made in his Lodge from the second Monday of March next to the time when the Assistant Grand Master shall visit his Lodge; and at the annual visit thereafter forever, the same to be certified by the Secretary of the Lodge and delivered to the District Deputy Grand Master with two dollars for every initiation made in said return, together with all Quarterages then due from his Lodge to the Grand Lodge.

The Grand Lodge shall cause to be provided a diploma, printed on parchment, with a device emblematical of, and suited to, the Genius and Design of Masonry, and purporting in a dignified simplicity of language, that the Bearer thereof (inserting the name) has been raised to the Sublime Degree of a Master Mason, in _____ Lodge, of regular standing as appears by the records of the Parent Grand Lodge of Massachusetts.

The diploma shall bear the Seal of the Lodge in which the Brother was raised, or is a member, and shall be signed by the Master, Wardens and Secretary of said Lodge.

At the foot of the diploma shall appear a certificate, signed by the Grand Secretary, by order of the Grand Master, expressing the date of the charter of the Lodge unto whom it is intended to be issued, and that the same was regularly constituted and is under the Jurisdiction of this Grand Lodge.

The Grand Lodge shall cause to be provided a diploma with a suitable and appropriate device, purporting the regular election of a Master by a Lodge duly constituted under its Jurisdiction and recommending to the respectful notice, friendly aid and attention of all regular Lodges, Masters, and Past Masters throughout the World.

That the Master of every Lodge, who shall cause his Lodge strictly to comply with the foregoing Regulations, respecting making returns, paying Quarterages and all fees, shall for his vigilance and fidelity be furnished by the Grand Secretary with a diploma of his office, gratis, and shall also be entitled to receive of the Grand Secretary, diplomas for each Mason, made, passed and raised in his Lodge agreeably to returns made thereof as aforesaid. The Grand Secretary shall supply each District Deputy Grand Master with a suitable number of diplomas whenever he shall apply, for which he shall be accountable when he shall make his returns in December; and for every diploma furnished to each individual, in advance of the foregoing Regulations, the applicant shall pay therefor seventy-five cents.

That every Lodge which shall make a correct return of the names of each member of the Lodge and will transmit therewith to the Grand Secretary seventy-five cents for each member shall be furnished with a diploma for each member so returned.

The price of charters hereafter to be granted by the Grand Lodge shall be seventy-five dollars.

That the fee of fifty cents, now paid for every making, shall cease upon the adoption of the foregoing Regulations.

It shall be the duty of the Grand Secretary to transmit as soon as may be a correct copy of the foregoing Resolutions to every Lodge within this Jurisdiction, as well as to every District Deputy Grand Master who shall be appointed pursuant to them; and from time instantly thereafter, upon the adoption of any Edicts or Regulations of the Grand Lodge, to forward without delay a correct copy of the same to the several District Deputy Grand Masters, that the same may be by them communicated to the several Lodges for the good of Masonry.

N. B. Every Lodge under this Jurisdiction being constitutionally obligated to attend all Quarterly Communications of the Grand Lodge either by its Master, Wardens or by proxy, the foregoing Regulations are not intended to supersede that duty.

Report of a committee appointed 12/09/1805, to "define the office, rank, etc, of the District Deputy Grand Masters, in their several Districts, their privileges, etc."

That there be appointed, and commissioned, with the seal of the M.W. Grand Lodge affixed to their commissions, in December annually by the Most W, Grand Master, nine District Deputy Grand Masters for Massachusetts proper, and three for the District of Maine.

Each District Deputy Grand Master may appoint a Secretary to accompany him on his annual circuit to visit the several Lodges in his District, but the Secretary so honor'd by the appointment is not to travel at the expense of the Grand Lodge.

District Deputy Grand Masters shall appear in the M, W'l Grand Lodge, and in all other Lodges, in their own proper clothing and the badges of their office,

In all processions of the M.W, Grand Lodge, District Deputy Grand Masters shall be placed after the Grand Wardens, according to seniority as before mentioned.

It shall be the duty of every District 'Deputy Grand Master to visit all the Lodges within the District to which he may be appointed, once, at least, every year, giving the Lodges timely notice thereof, and to make such visit or visits to such Lodge on or before the first Monday in December; to communicate without delay to each Lodge, all such information, regulations and edicts as may from time to time be transmitted to him for that purpose by the M. W'l Grand Master or the Grand Secretary, and to take charge of, and forward as soon as may be, all communications delivered him from such Lodges, to the Grand Lodge, the M.W. Grand Master or the Grand Secretary: to receive all returns and monies required by the M.W. Grand Lodge from each subordinate Lodge in his District, keeping an accurate account thereof; to make out correct statements of all the Lodges in his District, exhibiting therein, agreeably to the printed forms, the names of all the Brethren in each Lodge who have been passed, made, or raised, etc, the names of the officers and members of each Lodge in his District, for the time being, the monies due and collected for initiates, quarterages, etc, from each Lodge, for the Most W'l Grand Lodge, certified by the Secretary of each Lodge; and to make return of that and all his proceedings and to pay in all the monies he shall have received to the Recording Grand Secretary on or before the second Monday in December, annually, that the whole of his proceedings may then be laid before the M't W'l Grand Lodge, or a committee of the M. W. Grand Lodge appointed to receive them at that time, and report thereon. And shall also deliver to the Grand Treasurer duplicate accounts of all monies paid by him in behalf of the several Lodges or individuals, to the Recording Grand Secretary, and all his returns are to be recorded by the Grand Secretary, He is to keep an accurate statement of his expenses in visiting the several Lodges in his District and making the returns as aforesaid, and shall render in an account for his services to the Committee on Accounts, and if approved by the Most W'l Grand Master, and the committee, receive payment from the Grand Treasurer.

District Deputy Grand Masters are to constitute Lodges and install the officers of new Lodges under a commission from, and at the pleasure of, the Grand Master.

When District Deputy Grand Masters visit individual Lodges, they are to occupy a seat next to and at the right hand of the presiding Master; their Secretaries, who must be Master Masons, as must every officer of a Lodge, are to take their seats by the side of the Secretaries of the Lodges they visit.

Masters and Wardens of Lodges are to advise and consult with the District Deputy Grand Masters of their Districts, in all matters of importance where the interest of the Fraternity is concerned.

They are also to convene the Masters and Wardens of Lodges in their respective Districts for the purpose of hearing all complaints of individual Brethren, or of one Lodge against another Lodge, which said District Deputy Grand Master may think expedient to lay before them, or which they may be requested by the vote of any Lodge legally assembled, or by request in writing of the Master or by the Wardens of any Lodge in their respective Districts to lay before them.

Such conventions for the purpose last mentioned, are to be composed only of the Masters and Wardens of the Lodges in their respective Districts duly elected, or their proxies specially appointed for the purpose. At such conventions the members are to wear the badges of their office and the proxies the jewels of the office they represent.

All complaints, whether by individual Brethren of Lodges, or by one Lodge against another Lodge, shall be made in writing, and must, in the first instance, be brought before the District Deputy Grand Master of the District where they may respectively originate, who shall, immediately, or as soon as convenient, assemble the Masters and Wardens of the Lodges in his District, and lay the complaint before them; whereupon, they, or a majority of those present, shall investigate the matter, and give such judgment thereon as shall appear to them just and proper.

18th. Every District Deputy Grand Master shall keep in a book bound for that purpose, a record of his proceedings and an abstract of the returns of each Lodge before he shall forward them to the Grand Secretary. This book shall be delivered by each District Deputy Grand Master to his successor in office, and when full shall be delivered to the Grand Treasurer to be kept till otherwise ordered, with other books filled with the records of the Grand Lodge.