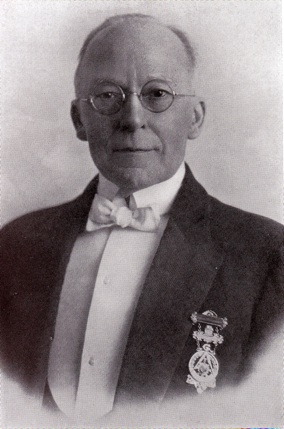 He then entered the theatrical field, and opened the first moving picture theatre in Providence, R. I. Later he became owner of theatres in several New England cities. At the time of his death, Brother Dillenback was connected with the Phelps Publishing Company, of Springfield., Mass.

Brother Dillenback was married June 2, 1885, to Mildred Aldena Kinchaid, who survives him. To them were born four children, Alden Irving Dillenback, Mrs. Harry R. Harwood, Emil Uhlein Dillenback, M.D., all of Springfield, and Mrs. Elliott Paddock, of Kansas City, Mo., all of whom are living.

To know Brother Dillenback was to love him for his genial way and kindly regard for his fellow man, never speaking ill of anyone, and always carrying sunshine wherever he went. He was a devoted husband and father, a faithful friend.

His work here is finished, but his works still live. His example to follow is his best work. He has entered the Celestial Lodge Above where he heard the greeting "well done, good and faithful servant."

The funeral service was conducted by the Most Worshipful Grand Lodge of Massachusetts in Park Memorial Baptist Church, Springfield, Mass., March 31, 1923.

Hiram Irving Dillenback, one of the highest Masonic dignitaries in the Massachusetts Grand Lodge, which he served as Deputy Grand Master, died in his home in Springfield, March 27th, in his 64th year. He was born in Boston, July 26, 1858, the son of Dr. and Mrs. Hiram Dillenback. He was graduated from Boston Latin School and spsnt two years in the class of 1822 at Harvard College. His first newspaper work was as a summer correspondent of the Boston Globe; later he was reporter on the East Boston Argus and the Boston Post. He was editor of the Boston Sunday Times and the Keene (N. H.) Republican; managing editor for the Rutland (Vt.) Herald and Providence Evening Telegram. He went to the Post as managing editor in October, 1892. Later he left the newspaper business and entered theatrical work in Providence and Springfield and in 1917 went to the Phelps Publishing Company in Springfield as promotion manager.