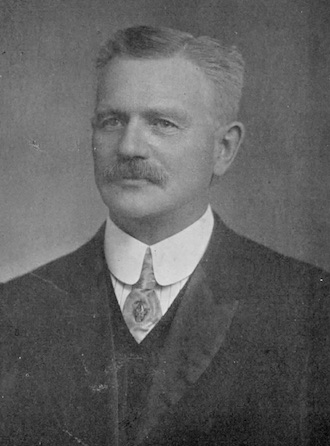 JAMES FRED PARKER, who was elected Grand Master of the Grand Lodge of Rhode Island at its annual communication Monday, May 18, was born in Dublin, New Hampshire, April 9, 1856. He received his education in the public schools of his native town and in Colby Academy of New London, N. H. In civil life he is Secretary of State, a position he has occupied since 1909. Previous to his election he had served as Deputy Secretary of State for sixteen years.

Most Worshipful Brother Parker commenced his Masonic career September 13, 1893, when he was made a Mason in Orpheus Lodge, No. 36. He received the Fellow Craft degree October 11th, and the degree of Master Mason October 31st, and was admitted to membership in the Lodge November 8, 1893.

He was elected Secretary at the Annual Communication in November, 1896, and served in that office for four years. He was Junior Warden one year, Senior Warden two years, and was elected Master November  11, 1903.

In the Grand Lodge, he was appointed Fifth District Deputy May 15, 1905, and continued to serve as a District Deputy until May, 1911, when he was elected Junior Grand Warden serving as such one year, followed by one year each as Senior Grand Warden and as Deputy Grand Master. At the One Hundred and Twenty-fourth Annual Communication of the Grand Lodge, held May 18, 1914, he was elected Most Worshipful Grand Master.

Brother Parker has taken an acthe interest in the other Masonic Bodies also. He is a member of Providence R. A. Chapter, Providence Council R. & S. M. No. 1, St. John's Commandery, K. T., Rhode Island Consistory A. A. S. Rite and of Palestine Ternple Mystic Shrine.

He was Em. Commander of St. John's Commandery in 1902, and in Palestine Temple he served as Ill. Potentate in 1903.