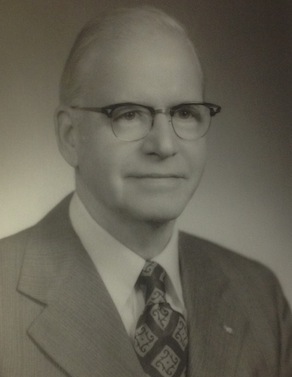 His basic education took place at Malden High School followed by four years at Boston University where he received a Bachelor of Business Administration degree. He was a member of Alpha Kappa Psi Fratemity, Boston University Chapter. He was married to Ruth Kimball, the daughter of a former Mayor of Malden, who passed away several years ago. He is survived by two daughters, Nancy R. Clarke of Lutherville, Maryland, and Priscilla R. Hurter of Lancaster, Pennsylvania, six grandchildren and thirteen great grandchildren.

His professional career began as a salesman for Liberty Mutual lnsurance Company where he became District Sales Manager. He then moved to Rust Craft Publishers where he was Director of Purchases and later became Vice President of United Printers and Publishers, a division of Rust Craft. His background as an instructor at Boston University and Northeastern University gave him the opportunity to move to Coronet Instructional Media Division Esquire, Inc. where he became District Manager of the New England states. He served as President for the New England Purchasing Managers Association.

Right Worshipful Brother Randall was very active in the First Church of Malden having served on the Board of Deacons as Chairman, the Prudential Committee as Chairman, and Chairman of the Building Committee for the new Educational Building. He was also active in the National Society for the Preservation of Covered Bridges Inc., Director of the Bay State Historical League, and a member of the Malden Historical Society, and was elected by the Senior Citizens to represent the city at the State House in Boston.

Brother Randall served in World War I with the 182nd Infantry in Company E.

His service to Masonry was both extensive and productive. Brother Randall was raised in Boston University Lodge in 1949 and served as secretary in 1956 and 1957. He was elected Worshipful Master for the years of 1963-1964. In 1965 he served as Grand Standard Bearer for Right Worshipful Norman M. Gay; District Deputy Grand Master of the Boston 2nd Masonic District 1968-1969; Master, 7th Lodge of lnstruction 1968-1969; Director of the Education Department from 1970 to 1982: Grand Representative to the Grand Lodge of Virginia, 1971 to 1988; and was elected Junior Grand Warden in 1975.

He was received into York Rite in Saint Andrew's Chapter n 1971, Boston Council 1972, and the Commandery in 1972. He was a member of all of the Scottish Rite Bodies in the Valley of Boston and was a member of the Consistory Choir. Brother Randall was a worker in Mount Olivet Chapter of Rose Croix and a member of Aleppo Temple in Wilmington.

Right Worshipful Brother Randall passed away June 28, 1988, in Lutherville, Maryland, in a nursing home near his daughter. A memorial service was held at the First Church in Malden on July 1, 1988.

His tireless devotion to Freemasonry, together with loyal service to his community and church, were characteristics that epitomized the life of Right Worshipful Wyman Stephen Randall.

R. W. Wyman S. Randall, Past Junior Grand Warden (1975), a member of the Education Committee of Grand Lodge from 1969, and Director through 1983, died June 28 in a retirement home in Lutherville, MD. Born in Maiden in 1901, he received the degrees in Freemasonry in Boston University Lodge in 1949. He served as Worshipful Master in 1964. A sales manager for many years, he was an affiliate with Wyoming Lodge until 1985. Grand Standard Bearer in 1965, he was District Deputy Grand Master of the Boston Second in 1968-69, and was appointed Grand Representative to the Grand Lodge of Virginia in 1969. He was elected Junior Grand Warden in December of 1974. His wife died several years ago and he is survived by one daughter.