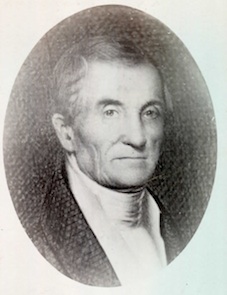 As the good & the faithful are removed from among us, no more to be seen of men, their work completed, their earthly labours ended, it becomes the duty of those who remain, to improve the inflictions of the all-wise Disposer of events, by keeping alive the memories of the just, that by the light they shed while on earth; still unextinguished, still beaming from their Bright example; they yet shall minister to our service, & though Dead yet speak from their dark abode. Therefore, with these motives, & that the virtues of a departed Brother shall survive in our hearts:

Resolved. That we mourn, though not as those without hope, for the great loss the masonic family in general & the Gr. Lodge of Massachusetts in particular, have sustained by the decease of our R. W, & Honored Brother Samuel Thaxter, Esq.

Resolved. — That in his example & character we have another testimonial that the good christian, the upright Citisen, & God's noblest work, the honest man, are but the practical excellencies inculcated by the precepts of our Institution.

Resolved.—That this tribute of our feelings be transmitted to the family of the deceased as an earnest of the esteem & consideration with which we cherish his memory — with the assurance of our deepest sympathy in this bereavement, which has taken from them the good husband & father, & from us the devoted and honored Masonic Brother.

On the 20th of April, at his residence in this city, Mr. Samuel Thaxter, Past Senior Grand Warden of the Grand Lodge of Massachusetts. He was an ardent and consistent Mason, and Past Master of Columbian Lodge. Mr. Huntoon, in his Eulogy on Dr. Harris, speaks of him as follows: "In all the duties of a citizen, a man, and a Christian, he was found worthy and well qualified for his Master's service and approbation. As a Mason, he was justly esteemed, respected, and honored for his integrity, uprightness and benevolence. He who discharges these great social, civil, and religious duties of life, manifests in the best manner his attachment to the principles, precepts and institutions of Freemasonry. The highest distinction we ever claim for our Association is, that it is the handmaid of virtue, morality, and religion. For the holy ministrations to beneficence ; for its strong arm of protection to the defenceless; for the substantial comfort it brings to the wretched; and for the radiant smile of joy it lights up on the withered brow of sorrow, it received, in its darkest hours, his constant attach¬ ment, unhesitating countenance and manly support; and for these, we respect his character and revere his well earned reputation. And in the language of pious ' faith and hope, and charity' we would say