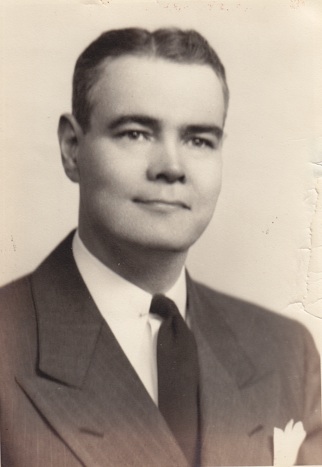 Right Worshipful Brother Warmington was born in Quincy, Massachusetts on December 20, 1902, the son of William C. and Mary Jane Warmington. Brother Warmington was graduated from the Quincy Public Schools and Burdett College. He began his banking career in 1921 as a messenger for the Granite Trust Company of Quincy. When he was appointed Treasurer of Norfolk County in 1950 he was the manager of the Wollaston Branch of the Granite Trust Company. He was reelected to the position of Treasurer of Norfolk County in 1950, 1954, 1960 and 1966. He served as County Treasurer until 1972 at which time he retired to Harwich Port on Cape Cod. During his tenure as Norfolk County Treasurer he was also active in community, church and Masonry. He served on the boards of several banks including the Quincy Savings and Weymouth Savings.

He served on the Quincy School Committee from 1945 to 1949 and on the Quincy Housing Authority from 1963 to 1965. He was the former president of the Quincy Council of Churches, the first lay-person to be appointed to that office.

He received the degree of Entered Apprentice in Rural Lodge of Quincy on September 11, 1924; was passed to the degree of Fellow Craft on October 9, 1924, and raised to the sublime degree of Master Mason on November 11, 1924. He served that Lodge as Worshipful Master in 1935, and as Treasurer in 1946. He was twice appointed District Deputy Grand Master of the Quincy 26th Masonic District, first from 1938 to 1939, and again from 1943 to 1944. He served on the Grand Lodge Education Committee from 1943 to 1945. He was appointed Senior Grand Deacon in 1946, and served his Grand Lodge as Deputy Grand Master in 1947. He was awarded the Henry Price Medal in 1947.

Burial was in Island Pond Cemetary Harwich, on March 4, 1985.

Each is given a bag of tools
A shapeless mass
A book of rules
And each must make,
Ere life has flown,
A stumbling block
Or a stepping stone.

These are the words of R.L. Sharpe and truly describe the life of our departed brother, Right Worshipful Raymond C. Warmington, for he built stepping stones for all of us.

I think one of the interesting features at the Feast of St. John in any Grand Lodge, when the list of appointments is announced, is to see who has been appointed by the Grand Master to the various offices in the Grand Lodge. Probably the one most looked for and anxiously awaited is that of Deputy Grand Master.

As we all know, the Deputy Grand Master is in reality the Vice-President, and in the absence of the Grand Master, he is the acting Grand Master. It is an important selection which the Grand Master must make for this office in Grand Lodge. I felt very happy at the success of my two previous appointments, Right Worshipful Brothers Stanley Wilson and Roger Keith. The way in which they have performed their duty as Deputy Grand Master has been very pleasing to me and I think to every Mason in Massachusetts who met Brothers Wilson and Keith. It was necessary to appoint a new Deputy Grand Master this year, and I have appointed a man who, I am sure, will be equally successful as his predecessors: Raymond Charles Warmington, known to most of us as “Ray.” He was born in Quincy and has been active in civic and fraternal affairs for many years. At the present time he is acting the part of a good citizen in serving, because of the votes he received, as a member of the School Committee of Quincy. He is Assistant Treasurer of the Granite Trust Company of that City.

Brother Warmington was raised in Rural Lodge in November, 1924. He was Worshipful Master in 1935, and is at present the Treasurer of his Lodge. He was District Deputy Grand Master of the 26th Masonic District in 1943 and 1944, and Senior Grand Deacon of the Grand Lodge in 1946. He is not only a member of Rural Lodge, but also of Orphan’s Hope and Norfolk Union Lodge. He is also a member of the Scottish Rite Bodies in Boston.

I take great pleasure in presenting to you the new Deputy Grand Master of Masons in Massachusetts, Right Worshipful Raymond Charles Warmington.

It is indeed a real pleasure, a real honor, and a real privilege to stand here tonight and be presented to you as the Deputy Grand Master of Masons in Massachusetts — an honor and a thrill that I certainly never thought I would experience. Up to a few hours ago I faced this meeting tonight with a great deal of courage, fortitude and strength, but during the past two or three hours, my strength has weakened somewhat. Perhaps I am, in everyday English, “scared.”

That is probably due to something that happened within the last few hours. Before coming to the Grand Lodge I was in conversation with one of my associates at the Granite Trust Company, a member of the female species, whose husband is a member of the Masonic Fraternity. In our conversation, I told her that 1 was going to the Grand Lodge this afternoon to be installed as the Deputy Grand Master. She looked at me in an amazed sort of way and said: “I thought that position was usually reserved for some prominent clergyman, or for some one who is or has been in high political or business life, or perhaps to some outstanding orator.”

So I looked at her and said: “Well, so what?” She shook her head and sadly said: “Gosh! For the appointment this year they must have gone right down to the bottom of the barrel.”

So at the present time I am somewhat confused, somewhat bewildered, wondering if the Grand Master did make a mistake in appointing me as his Deputy; wondering if he did really have to go down to the bottom of the barrel to make this appointment this year.

I have been honored many times by our Grand Lodge. I was appointed District Deputy Grand Master four or five years ago by Most Worshipful Albert Schaefer. A year later I was re-appointed by Most Worshipful Arthur W. Coolidge. As we all know, Most Worshipful Brother Coolidge was succeeded as Grand Master by our present Most Worshipful Grand Master, Samuel Holmes Wragg. Of course I was not re-appointed for the third year, naturally, but for some reason or other, one of my Masonic friends in Quincy started the story that for the first time in the history of the 26th Masonic District, the District Deputy — meaning me — was ousted from office by the Sheriff of the County. A short time ago when I learned of this appointment, I went to that individual and told him that in the year 1947 I was going to serve with Sam Wragg. He said: “Is that so? Where, at the hotel on Village Street in Dedham?”

So when I go home tonight, I hope that I will be given some sort of a diploma that I can take back to the Masons in Quincy to prove that I am still in the good graces of the Grand Lodge.My Brethren, I am succeeding in this particular office men who have contributed much to Masonry; men who have proven a real credit to the Craft in Massachusetts, and I pray to Almighty God in Heaven tonight for guidance and for help, that I may be a worthy successor to my predecessors who have held this particular office.

We are now in what is called the “Atomic Era”— an era in which Masonry must play a great part; an era in which we, as Masons, must prove to the world that Masonry is more than mere ritual. It is too bad we could not have a Masonic era.

We have heard the Grand Master, and through him, the District Deputy Grand Masters, say on numerous occasions that our job in Masonry is to put Masonry into the hearts and minds of men, rather than to worry too much about putting men into Masonry.

In the years of 1945 and 1946 the group of men who have served with our Grand Master^under his guidance, have maintained and extended throughout the Blue Lodges and throughout the jurisdiction a spirit of friendliness and good fellowship, fraternalism and real Masonry.

So in this year to come, in 1947, I pledge to you, Most Worshipful Grand Master and to the Masons of Massachusetts my whole-hearted cooperation, and I shall endeavor with all the power at my command, with all my heart, and all my mind, and all my soul, to extend and endeavor to spread throughout the jurisdiction that spirit of friendliness, that spirit of Masonry, that is exemplified so well by our Grand Master; that Masonic way of life that has been needed so much in the world of the past; that Masonic way of living that will be needed more than ever in this world of tomorrow.