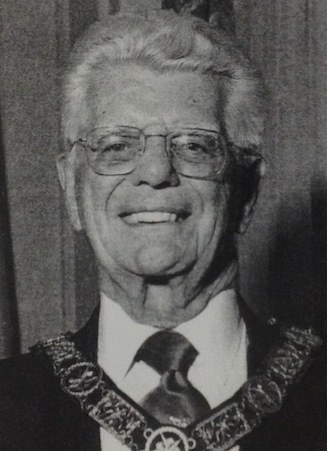 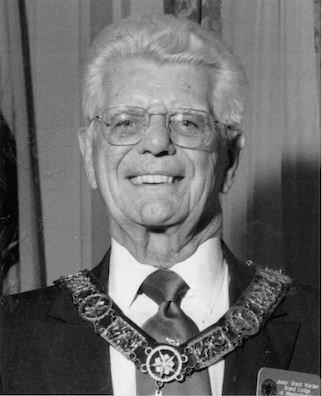 Serving as a Grand Lecturer since 1993, Right Worshipful Harry E. Sneider of Waltham was elected Junior Grand Warden in his first attempt and was installed to that office by the Grand Master. Raised in Isaac Parker Lodge in 1962, he presided in the East in 1975, 1976 and 1983. In 1985 he was presented the Joseph Warren Distinguished Service Medal.

He is not unlike so many other men who were not active DeMolay boys, but who have made up for it as Masons by contributing their time and money to make the fraternity vibrant for the young men, like his own three sons who became active in Waltham Chapter. He served five years as chapter advisor and five additional years as the chairman of the advisory council. In 1980-83 he was the District Deputy of the Seventh Middlesex District and in 1985-86 he was President of the Massachusetts Court. DeMolay Legion of Honor. He was recipient of the Honorary Legion of Honor in 1970.

Brother Sneider has shared the honor, pride and joy that goes with raising two of his three sons and knowing that all three are members of the Craft. They, in turn, have made him a proud great-grandfather. He was District Deputy Grand Master of the Brighton Fifth Masonic District in 1986-87.

Six years of his life were spent with the United States Army. He went the entire nine yards of World War II, beginning with North Africa, then Italy, France and Germany, plus a stint in England serving as a Chief Warrant Officer in the Ordnance Department. Even the Army knew a good man when they had him. When the last shot was fired and he returned to Waltham, he picked up where he had left off— in the paint business. Not painting with a brush, but travelling New England selling dealer and industrial accounts for somebody else to do the painting.

Our new Junior Grand Warden has served as president of the Fifth District Past Masters' Association and he has affiliated with The Masters and Norumbega and Brookline Lodges, both meeting in Newtonville. He was a certified instructor with the 34th Lodge of Instruction, a committee member and instructor with the District Deputy Grand Masters Training Program. His Scottish Rite membership is with the Valley of Boston and Massachusetts Consistory.

For most of his life he has been a member of the First Parish Church of Waltham but, like many others, finds himself inactive since the Unitarian Universalist faith has chosen to embrace a liberalism not consistent with what the founders had in mind.

"I really enjoyed my many years as a DeMolay Advisor; found it to be a rewarding experience that still lives when you have a man come up to you and call you Dad. It makes me feel I did something good for a young generation." Many men share his joy, but not enough Masons will get involved to learn that every boy needs a big brother. For Right Worshipful Harry Edward Sneider DeMolay has carved a big niche in his life and which he continues to serve.

SNEIDER, Harry E. Sr. Of Waltham, May 5, 2011. Husband of Patricia A. (McGrady) Sneider. Father of Harry E. Sneider, Jr. and his wife, Debra, of Saxonville, Kenneth L. Sneider and his wife, Janet, of Billerica and Thomas A. Sneider and his wife, Linda, of Medford. Also survived by four grandchildren and three great-grandchildren. Family and friends will honor and remember Harry's life by gathering for calling hours in The Joyce Funeral Home, 245 Main Street (Rte. 20), WALTHAM, on Monday, May 9th, from 4 to 8 p.m. and again on Tuesday afternoon when his funeral service will be held at 1 p.m. Interment in Massachusetts National Cemetery, Bourne will be private. Memorial donations may be made to Shriners Hospital for Children, 51 Blossom Street, Boston, MA 02114.