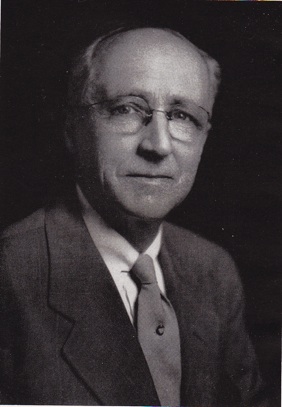 On August 24, 1957, Right Worshipful Frank Herman Hilton, one of the most widely known and universally beloved members of our Craft, laid down his working tools after fifty-three years of service. To an unusual degree he personified Massachusetts Freemasonry in the three continents and the Canal Zone, in which our Grand Lodge had jurisdiction. His was a long and interesting record of service in countless ways to countless people.

He was born in Cambridge, Massachusetts, on July 27, 1875, the son of James Madison Hilton and Mariette Frances (Stacy) Hilton. He graduated from Cambridge High and Latin School and then entered the business world. From 1894 to 1897 he was in Fanueil Hall Market; and from 1897 to 1902, with Lexington Lumber Company; from 1902 to 1920, he was Treasurer and part owner of The Cloverdale Company. He was a Sergeant in the First Motor Corps, Massachusetts State Guard, from 1916 to 1917.

He was received as an Entered Apprentice in Mizpah Lodge, Cambridge, on April 12, 1904, and on June 14, 1904, was passed to the degree of Fellow Craft, raised to the Sublime Degree of Master Mason and signed the By-Laws of the Lodge. He was appointed a line officer in the Lodge in January 1906 and became its 26th Master on December 11, 1916, serving with great distinction until January 1918. During this trying World War I period, 1916-1918, Mizpah Lodge, under Worshipful Brother Hilton's direction, became a home away from home for over two hundred servicemen of the United States Navy Radio School in the Boston area. In appreciation of the brotherly love and affection shown to them by Wor. Brother Hilton and the members of Mizpah Lodge, this band of over two hundred Masonic servicemen, in January 1918, presented Wor. Brother Hilton a beautifully inscribed silver trowel which is to this day one of the proudest possessions of the Lodge.

Right Worshipful Brother Hilton was a member of St. Andrew's Royal Arch Chapter, a Charter member of the Cambridge Council of Royal and Select Masters, and a member of Boston Commandery, Knights Templar. He was also a member of the Boston Lodge of Perfection, Giles F. Yates Council Princess of Jerusalem, Mount Olivet Chapter of Rose Croix, and Massachusetts Consistory. He received the Honorary 33rd Degree in the Supreme Council, Scottish Rite, on September 24, 1944.

When the invasion of China caused the suspension of our Masonic activity on that continent, Right Worshipful Brother Hilton spent endless hours of time, in addition to his arduous duties as Grand Secretary, corresponding with and helping our Brethren in China and throughout the world wherever they had dispersed. No one will ever know what an extraordinary service he rendered in this time of need, but it was typical of his attitude toward everyone with whom he came in contact throughout his long life.

Right Worshipful Brother Hilton will long be remembered as a truly remarkable Mason who by his thoughts, words and actions always exemplified the highest tenets of our Ancient and Honorable Institution.