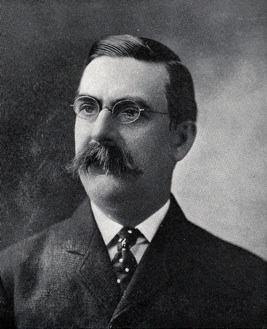 Brother Robertson was educated in the public schools of Charlestown, and on leaving the grammar school entered the service of a wholesale drug house. Leaving that concern, in 1881, he went into business as an insurance agent and broker, continuing the business until the end of his life.

He took his Masonic degrees in Henry Price Lodge in 1874 and was its Master in 1883-4, and Secretary from 1884 to 1902. He was District Deputy Grand Master for the Third Masonic District in 1886 and 1887 by appointment of Most Worshipful Abraham H. Howland, Jr. and Most Worshipful Henry Endicott. After holding several offices in Grand Lodge, he served as Junior Grand Warden in 1894. He was a member of the Committee on Charters and By-Laws for seven years, beginning in 1895.

Brother Robertson was a member, but never an office holder, in all the Bodies of the York and Scottish Rites. Until his comparatively recent removal to Quincy, Brother Robertson was very regular in his attendance at Grand Lodge, where his kindly and genial manner made him a universal favorite. He passes, full of years and honors, leaving none but delightful memories behind him;

R.W. Charles Stuart Robertson was born April 24, 1850, in Charlestown, then a city in Middlesex County now a part of Boston. He attended the public schools. He was in the employ of George C. Goodwin & Co., wholesale druggists from 1865 to 1881. Thereafter he carried on business as an insurance agent and broker in Boston for the remainder of his life. He moved to Somerville in 1880 and held office there as clerk of the Common Council from 1888 to 1900, and as City Auditor from 1890 to 1908. He passed away June 1, 1936. He was married to Carrie E. Waterman, of Charlestown, who survives.

He belonged to the Central Club of Somerville where for many years he played whist and bowled ten pins. He was fond of fishing and often in the spring went into camp for salmon fishing at or near Moosehead Lake in Maine and in the autumn went smelt fishing in Hingham Bay on the Massachusetts coast.

Genial and companionable, he was known to his friends as "Charley Rob." A man of integrity, honorable and kindly in his business dealings and social relations he inspired respect and affection. Faithful to his Masonic obligations both within and without the Lodge-room he has given us as a heritage the memory of a Brother Mason who lived a good life in accordance with the principles of our Fraternity.