In 1861, six dispensations were granted for lodges to be held with active-duty regiments during the American Civil War. Each dispensation was granted to a particular regiment. These dispensations expired at the end of 1865. 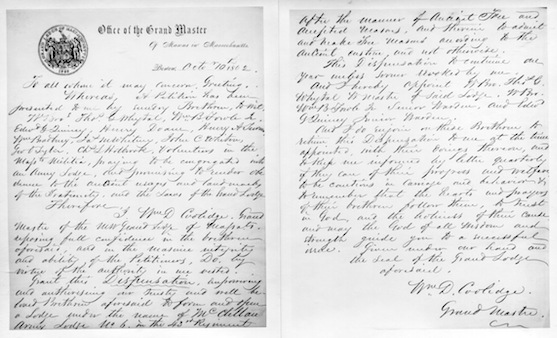 The Grand Master of this State has just granted a Dispensation for a Lodge to be held in the 43d regiment, Col. Holbrook, to be called the " McClellan Lodge." We understand that there are at least a hundred Masons in this regiment, including most of the officers.

A large attendance of Masons of this city took place Tuesday evening Aug. 4th, at the Masonic Hall, the occasion being the surrender of the Dispensation granted to McClellan Lodge by the Grand Lodge of Massachusetts.

The MoClellan Lodge was composed of members of the 43d regiment, and a Dispensation was granted at the time of their departure for Newborn, N. C.

The ceremonies of the occasion Tuesday evening took place in Corinthian Hall, which was decorated with the regimental flags of the 43d, and was well filled with members of the Lodge, who appeared in full uniform and regalia, and the friends of the regiment, among whom were a large number of the past members of the Boston Light Infantry.

The Worshipful Grand Master Parkman, together with the Grand Lodge, visited Corinthian Hall in a body, and formally received the Dispensation, and discharged the officers. It was a novel light to witness all the official chairs filled with members in foil military uniforms.

The acts and records of the McClellan Lodge were reviewed, and showed that during the six months in which it was in working order at Newborn, over forty members were initiated.

During the evening, a magnificent silver pitcher was presented by the Lodge to their Worshipful Master, Capt. Thomas G. Whytal, and a beautiful silver goblet to the Secretary, Lieut. James M. Whitney. The presentation speeches were made in a very happy manner by the Senior Warden, Capt. Win. B. Fowle, Jr., and the recipients of the splendid gifts made appropriate responses.

After the services of the evening, the Lodge with its guests adjourned to the banqueting hall, where an excellent collation was spread by Mr. Silsbee of the Winthrop House. At the tables speeches were made by Captains Whytal, Fowle and Rounds, of the Lodge, and by Rev. Messrs. Greenwood, Dadmun and Studley, Grand Master Parkman and others, some of whom feelingly alluded to the serious illness of the Chaplain of the Lodge, Rev. Jacob M. Manning, whoso recovery was stated to be exceedingly doubtful. Since dead.

The occasion was one of much enjoyment to all present, and terminated by the whole company joining in singing the Star Spangled Banner and Auld Lang Syne.